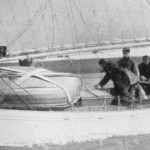 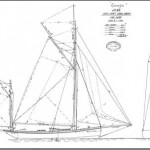 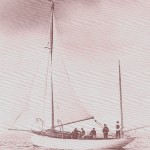 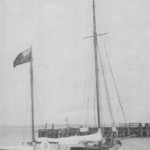 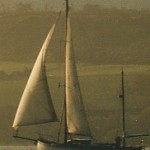 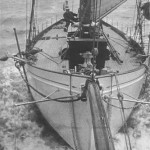 Her first owner was Andrew McIlwraith, a Scot born in Ayr in 1844.

He had formed, with Malcolm McEacharn, a London-based shipping and mercantile firm, McIlwraith, McEacharn & Co (now ASP Ship Management), trading with Australia. They built up a fleet of ten ships sailing under the name of the Scottish Line to Australia (Melbourne,  Victoria and Queensland) and carried many immigrants to Queensland as mentioned in the Cairns Post on Mon 13 June 1927. In 1880, McIlwraith pioneered the shipping of frozen meat and in 1887 opened a branch of his company in Melbourne, Australia, run by his brother John who had emigrated there earlier. He made the last of his many trips to Australia in 1912, after his successful reorganisation of the Tokyo tramways. In 1913, he retired to Salcombe in Devonshire, England, where he became a local benefactor, donating Cliff House to the town to house a library and the Salcombe Yacht Club. He died in 1932.

Cooya’s name must have come from McIlwraith’s Australian connections. Interestingly, a four year old racehorse named Cooya won the Victoria Racing Club Stakes in 1892 at Flemington Racecourse, Melbourne, where members of Andrew McIlwraith’s family lived at the time. Another horse called Cooya is listed in 1906, out of  ‘Coo-ee’ which is an Aboriginal greeting or call. A number of place names in Australia include the word Cooya, the best known of which is Cooya Beach, near Port Douglas in North Queensland. Linc Walker, a member of the Kuku Yalanji clan who have lived in this area for tens of thousands of years tells me that Guyu is Fish in their language and that the traditional name for the beach there is KuyuKuyu, which sounds like Cooya. Also, this Aboriginal/English dictionary lists Kooya as meaning Fish.

Her third owner (1921-1926) was Captain Thomas Joseph Mellonie, of Ipswich, Suffolk, who was a merchant seaman and a friend of the legendary Thomas Lipton. His son, Captain John Mellonie, a P&O Commodore, first met his wife, Anne, on board Cooya the day she first arrived as a visitor from Australia. Anne had been invited to sail with the Mellonie family by John’s sister, Margo.  John Mellonie wanted to buy her back in 1945, but couldn’t afford to. The first two photographs, taken during this time, when Cooya was about 10 years old, were provided by Thomas  Mellonie’s great grandson, Vaughan McGillivery, who grew up in Geelong, Australia and is passionate about wooden boats: he was Boating Industry Association of Victoria 2006 Apprentice of the Year.

After one year with her next owner, David Christian Wardlaw, Cooya was bought by Tom Hamilton Cockburn-Mercer (1927-33), an Army Officer who came from Jersey although he did spend time stationed in other areas, including Ireland, and Sussex where she may have been berthed for a while. His daughter (born 1921) always told wonderful stories about the times the family spent on her, both racing and cruising (often up the West Coast of Scotland (Tom always used to say that a good test of a sailor was to go through the Sound of Sleat under sail!). Apparently, the family employed a skipper (known as ‘Skipper John’) and a deck-hand.  His granddaughter now lives in Kinrosshire and has photographs of her grandfather on board Cooya, and another of her grandmother sitting knitting on deck!

Cooya then gained some reputation as a racing boat with her next owner, Edmund Gore-Lloyd (1933-1937).

During much of the Second World War, Cooya was was laid up in a mud berth in the Hamble river and was cared for by Camper and Nicholsons, who sold her in 1944 to Noel Hebden Knee, who provided the third photograph above. He kept her in the mud berth in the River Hamble, but was never able to sail her. However, one day in the early 1980s he recognized Cooya when she was moored in Camaret-sur-Mer in Brittany and came on board.

In 1946, soon after the Second World war, she was bought by Edward (Eddie) Tyler of Chislehurst, Kent. He, too, raced her successfully. She won the ‘Jane’s Cup’ race from the Medway Yacht Club to the Sandetti Lighthouse and back in 1952. He was a successful housebuilder and had begun using fibreglass to make moulds for concrete panels for prefabricated houses: he decided this material would be excellent for waterproofing the deck. After thorough drying, Cooya’s decks were fibreglassed in 1952: this was possibly the first ever use of fibreglass on a yacht. The polyester/glass coating served her well for a full 50 years before being replaced with epoxy/glass sheathing in spring 2003. The sheathing has certainly played a major part in prolonging Cooya’s life by keeping out rainwater. At this time, Tyler also moved the mast aft, shortened the bowsprit and converted her to a Bermudan Cutter, adding a teak and glass cuddy. Later, he moved the companionway from amidships to its present position forward of the cockpit, built a large Deck Saloon coachroof and reorganised the accommodation below. He replaced the small 4 cylinder General Motors engine which had been fitted in pre-war times: first with a twin cylinder Turner diesel, and then in the late 1950s, with a Perkins P6 Diesel. Much of this work was undertaken by Wilfred (Billy) Monk, whose son Norman sailed on board Cooya (at the age of 10) when she won the ‘Jane’s Cup’ in 1952. Norman Monk met up again by chance with Cooya’s current owner when Cooya overwintered in Lisbon in December 2000.

Cooya moved back to Salcombe in 1960, where Brigadier Michael Foley, Vice-Commodore of the Island Cruising Club, lived on board. He wanted Cooya to be easier to handle and changed her back to yawl rig, preferring the more flexible rig, His son, Peter, tells me that this work was carried out either in Eric Holby’s yard in Salcombe, or more probably at Mashfords in Devonport (Plymouth). Brigadier Foley cruised extensively in SW England and Brittany: Peter Foley remembers a cruise as far as Belle Isle and, in 1963, he and his wife cruised Southwest Ireland. The log of this cruise was published in Yachting Monthly, December 1965. He liked Ireland so much that he later moved to live in Baltimore, County Cork, Ireland, where wooden blocks from Cooya were still decorating Dinny Salter’s pub in 1979.
Colin Palmer and Mike Yendell have cruised extensively in Cooya, including Biscay crossings to Spain and Portugal, two East Atlantic circuits via Madeira and the Azores as well as numerous cross channel cruises from the South Coast to Brittany, cruises to and around Ireland, the fabulous waters of the West Coast of Scotland. In 2004, she enjoyed a 3000 mile cruise from Scotland across the North Sea and around the Baltic before returning via the Kiel Canal to winter in the South of England. After wintering in the Exe canal in Devonshire, Cooya sailed South in 2005 towards the Eastern Mediterranean via France, Spain, Portugal, Majorca, Sardinia, Tunisia, Sicily, Greece and Turkey and later in the year sailed from Turkey to Beirut in Lebanon and back, wintering in Antalya.  In 2006, she cruised the Mediterranean, Aegean, Marmara and Black Sea coasts of Turkey to Poti in Georgia, then to Yalta and Sevastopol in Ukraine, Bulgaria and South again through the Sea of Marmara and Aegean islands of Greece to winter in Koilada in the Greek Pelopponese. In 2007, Cooya was the first amateur yacht to cruise the coast of Libya for about 30 years, and Mike and Eilean Yendell then took her to the Canaries, Senegal, and the Cape Verde islands, from where she crossed to Brazil. Since then she has visited Surinam, Grenada, Bonaire, Cuba, the USA and Canada.Derek & Betty Carr, of Downpatrick, bought her in 1965, moving her to Strangford Loch in Northern Ireland. In 1973, they sold her to Colin Palmer and her present owner, Mike Yendell, who took full ownership in 1976. Together,  Colin and Mike undertook a major refit to prepare her for short handed ocean sailing. This refit included lowering and strengthening the coachroof, new keelbolts and floors, rebuilding the accommodation into its present form, electrical work, replacing the deteriorating wooden mast with an alloy mast (ex-British Steel, Chay Blyth’s circumnavigation yacht). Since then, Cooya has benefited from numerous improvements (including roller reefing headsail system, self-steering, instrumentation etc.) and continuous maintenance including refastening, substantial strengthening of the floor structure, new chainplates, re-coppering, engine refurbishment, etc, all under the eye of one of the UK’s most experienced wooden boat surveyors, Ian Nicolson. More recently, she has undergone a major refit with numerous improvements. Her deck and cockpit have been fully refurbished and waterproofed with epoxy sheathing and she has been re-engined with a modern Perkins 60 HP unit with new gearbox and sterngear.

Cooya has weathered some nasty, 40 knot plus, gales during these cruises, including a knockdown mid-Atlantic. Each time, her seams remained as they were before, showing the quality of her construction and the excellent condition of her hull after 97 years!

Her previous owners were as follows:

Brest: the world’s largest maritime festival in photographs by Nigel Pert & Dan Houston with a … END_OF_DOCUMENT_TOKEN_TO_BE_REPLACED