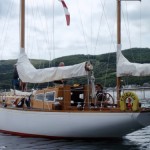 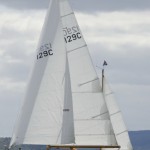 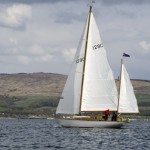 “My dads friend, Craig Downie owned this yacht for many years. I can’t remember how many. He brought her to Robertsons yard Sandbank for her yearly winter makeover.. My dad had the greatest yearly pleasure in this task. He worked on Mr Downies previous yacht Carron. My dad was foreman painter with Robertsons Yard Sandbank and he was there for many years. It was the most wonderful place for a young 6yr old girl who’s dad loved and breathed the place, as I did, till the day it closed!!!!

We had many great trips on Coigach, as we as a family were invited out on day trips, but my dad went on many trips, regattas, races, and they were commodore, on many races round Scotland and Ireland. I have only seen her once since Craig Downie sold her and that was at Isle of Jura, where we have gone for the last forty years; many wonderful memories from such a beautiful yacht.  My dads name was Daniel Douglas and Craig wouldn’t have anyone else painting her. Even when Robertsons closed down and they moved round to Mcgruers Craig said he wanted his friend and the only one that would do Coigach properly and proudly was my dad Danny, who sadly died August 1993. I am now 50 and we are still friends with Mr Downie, and the years of Robertsons and Carron  and Coigach will remain, always….” Information courtesy of Laurie Douglas (May, 2016).

‘Coigach’, seen in the photo above, was used as the Committee Boat for the Mylne Regatta in Scotland in 2009.

Brest: the world’s largest maritime festival in photographs by Nigel Pert & Dan Houston with a … END_OF_DOCUMENT_TOKEN_TO_BE_REPLACED