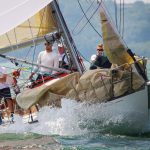 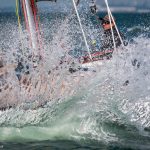 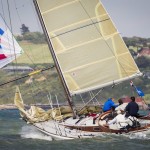 An iconic race winner by any standards, her light weight – for that period nevertheless belies the strength of Clarionet’s construction by Lallows and while the accommodation below is not luxurious there is space and the facilities sufficient to allow for more relaxed sailing. Nonetheless her reputation and capabilities are an undoubted inspiration to those with racing in mind and it is notable that Clarionet along with her sister ‘Roundabout’ figure – as the “Terrible Twins”  in Olin Steven’s “LINES- a half century of yacht designs” – with particular reference to the pioneering – and successful use of separated rudder and keel.

Clarionet has had a long and successful racing record from her first year 1966 when she won or came second in almost every race she took part in, including Cowes Week winner and first overall in the RORC 1966 St Malo Race. Some of her successes within the last 30 years include

Brest: the world’s largest maritime festival in photographs by Nigel Pert & Dan Houston with a … END_OF_DOCUMENT_TOKEN_TO_BE_REPLACED