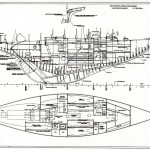 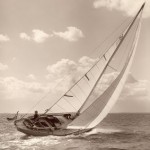 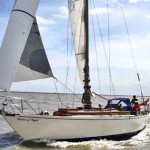 In the year she was launched she was selected to represent the British Admiral’s Cup Team. She was successful in winning. She also won the Fastnet Race of that year, which was part of the Admiral’s Cup Series.The boat was subsequently modified and the rudder was detached from the keel and hung from a skeg. The original rudder was reduced in size and became a trim tab. Nice idea.The boat continued to enjoy a successful racing career. It is believed that Sir Edward Heath was introduced to ocean racing aboard this boat and subsequently order the design of Morning Cloud.

Brest: the world’s largest maritime festival in photographs by Nigel Pert & Dan Houston with a … END_OF_DOCUMENT_TOKEN_TO_BE_REPLACED