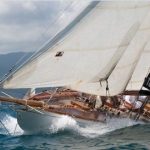 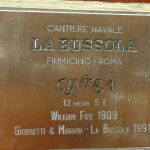 Cintra is said to be the oldest 12-Metre still sailing.   She was built to the First International Rule for Andrew Coats and frequently raced another Fife 12-Metre, Alachie, which was owned by Andrews’ brother, George Coats. She was fast in lighter airs achieving 13 firsts out of 33 starts in her first year, 1909.

Sold by Coats 3 years later, Cintra spent time in Scandinavia, Oslo and Copenhagen in particular, and was last seen on the race circuit at the Round The Island Race in 1956. Over the years she had various changes take place including the installation of a large two level cockpit and a big engine.

Between 1990 and 1999 she was restored in Italy at the Cantiere La Bussola of Fiumicino and has since been racing in the classic regattas of the Mediterranean in the Vintage class.

“My great uncle was lost overboard from her in August 1909 off Dartmouth, England with one other crew member”. – Neil Macqueen

“Raymond Attwood and his Brother Colin Attwood owned her in Kent, England. They restored her and took great care of her-they frequently talk about their wonderful memories and look at photos.” – Jo Attwood.

Brest: the world’s largest maritime festival in photographs by Nigel Pert & Dan Houston with a … END_OF_DOCUMENT_TOKEN_TO_BE_REPLACED