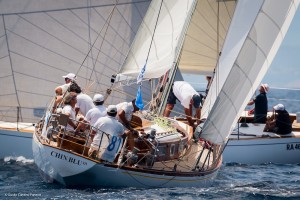 Chin Blu III (blu dog / shark in patois) was built for a famous french yachtsman, Pierre Fabre, who raced her until 1972.

In 1989 she was restored by Nello Saltalamacchia in Imperia, re-starting a racing “career” with a first at the Trofeo Almirante Conde de Barcelona in Palma in 1991 and a first at “Vele storiche di Imperia” del 2006, with the following owner Riccardo Di Giovanni.

After a further stop from 2008 to 2012 she started again to race with the new owner Giuseppe Caruso winning in 2013 the Accademia Navale Trophy in Livorno, getting a first at the Panerai’s “Vele d’epoca” in Naples, a second at the ”Argentario Sailing Week”, a second in the overall of the Panerai Yacht Challenge Mediterranean circuit and a second in the overall of the Durand de la Penne Trophy.

In 2014 she won the Mariperman Trophy and the Durand de la Penne Trophy, she was the first in her category at Argentario Sailing Week and at the “Vele d’Epoca” in Naples.

Brest: the world’s largest maritime festival in photographs by Nigel Pert & Dan Houston with a … END_OF_DOCUMENT_TOKEN_TO_BE_REPLACED