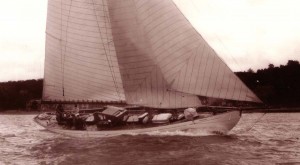 Arrived in Bermuda on “25th November 1959. The crew consisted of the owner William Kempe, Capt. Len Evans (skipper), myself (navigator) and a Portuguese lad”. (information courtesy of Roger Humby). 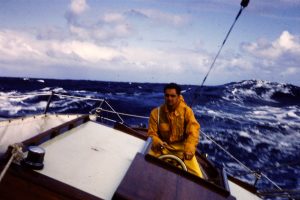 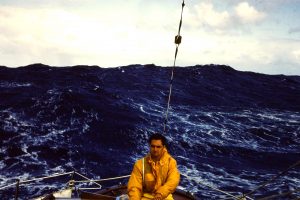 Chicane has remained in Bermuda ever since (2009).

Reid Kempe bought her in 1975 and chartered her with his wife in between their day jobs for 14 years.

Since 1990 ‘Chicane’ has been undergoing an extensive restoration by the loving and skillful care of shipwrights Joe Postich and Wendy Bliss.

The Restoration by Reid Kempe (Owner)

We are currently researching her early history, but Peter Nicholson has told me that he remembers her at moorings on the Solent when he was a boy.

What is certain is that she was sailed to Bermuda by William Kempe in 1958 where she has remained ever since. I bought her in 1975, so she has been in the Kempe family, and in Bermuda, for over 50 years, having had only two owners in that period.

My wife Lucia and I chartered Chicane in between day jobs for 14 years until we undertook a massive re-build in 1990. She has been under restoration ever since under the loving and skillful care of shipwrights Joe Postich and Wendy Bliss.  Joe and Wendy are products of the first Apprenticeshop in Bath, Maine, the brainchild of the legendary Lance Lee. The Apprenticeshop was one of the first ‘woodenboat’ institutions and lead the way in the woodenboat renaissance in the US and worldwide.

It has been very difficult to restore a classic yacht on a 20 square mile rock in the middle of the Atlantic: no classic yacht skills; no traditional yacht supplies; high expenses! But the biggest difficulty has been having only two people to perform the myriad of tasks and responsibilities required for a restoration: project management, purchasing, administration, shop and tool maintenance, design, shipbuilding, joinery, furniture making, metalworking, welding, engineering, systems design, systems installation, engine room sound-proofing…. the list is endless!

Early advice and support was forthcoming from such luminaries as Ian Nicolson and David Ryder-Turner of A. Mylne and Co. and Gordon Swift and Giffy Full of Woodenboat School fame.

The skill, dedication and aesthetic sense of Joe and Wendy have been key to the quality and authenticity of this restoration. Their methods have been traditional with the use of modern materials when appropriate. So the work has involved tens of thousands of silicon bronze fastenings, miles of caulking and a traditional laid teak deck (sprung).

We are nearing the end. In the words of the Grateful Dead: “What a long, strange trip it’s been!”. But a quite magical one. And one we have enjoyed every step of the way. We have learned so much. And we are now ready, at last, in our next lives, to do it all over again! 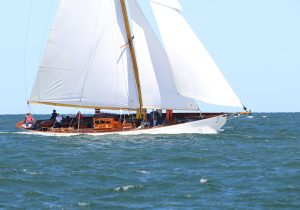 Restoration of the much-loved Chicane, initially undertaken by Wendy Bliss and Joe Postich in Bermuda, was recently completed by Wooden Boatworks in Greenport, NY. This has been something close to a rebuild, albeit within the original Burma teak hull. The restoration is already well known for its quality and the list of those involved could fill volumes. Reportedly, the late Olin Stephens called it the best restoration he’d ever seen. She’s found a new home at the Mystic Seaport Museum in Mystic Connecticut, so now the world can appreciate her beauty.” CLASSIC BOAT

Brest: the world’s largest maritime festival in photographs by Nigel Pert & Dan Houston with a … END_OF_DOCUMENT_TOKEN_TO_BE_REPLACED