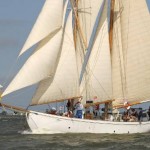 Carrina was originally designed in 1914, with a canoe stern and spoon bow, and was kept in a shed until July of 1929 when she was commissioned and launched by Lord GF Carrington of Kingshaw.  Due to the high quality of the boat-building, it is thought that no major work was needed until the Seventies when the stempost was renewed.

She has many of her original parts in the interior, including the plated pumps and marble top wash basins and the beautiful ‘french polished’ mahogany panelling. Teak dining table and chairs are all original and wonderfully preserved with the patina that only comes with age.  In 1946 her rig was changed into a Bermudian staysail and running Wishbone rig.  The boom was shortened by approximately 10ft (3.3m).  This made her easier to handle.  Fred Shepherd also added a squaresail to the sail plan.

1953-1982 Staniland family – Cruised and lived aboard the yacht for 29 years and averaged about 5000 miles a year that included 6 Atlantic crossings.

1982-2003 John Christopher Horton – cruised the Mediterranean extensively and sailed Carrina to Brazil where he spent 3.5 years exploring the countries’ rivers and coastline. He returned to Seville in Spain where a substantial amount of work was carried out.

Brest: the world’s largest maritime festival in photographs by Nigel Pert & Dan Houston with a … END_OF_DOCUMENT_TOKEN_TO_BE_REPLACED