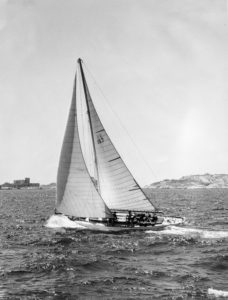 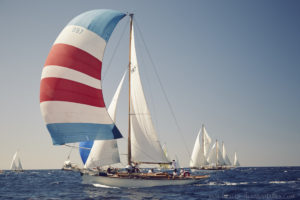 Briseis was built for the car manufacturer Louis Renault. Renault wanted to look after the engineering side to the yacht and equipped her with an electric motor, the first sailboat in the world to use this modern propulsion system.

After starting life in the English Channel and the Atlantic, Briseis sailed to the Mediterranean in 1959. In 1962, her owner, the architect Bernard Laville called André Mauric, architect of Penduick VI, to improve the yacht’s performance. Accordingly she was given an enhanced mast, deck plan, Gibb fittings and Ratsey & Lapthorn sails, the must of the time.

Today(2018), Briseis (?still has her electric motor?) has been modernised with an asymmetrical spinnaker and a large lightweight Genoa. The boat is constantly used for cruising and racing.

“The electrical engine is not on board since 1948 I think. A classical Nanni Diesel motor 4.220 HE propels the yacht.”

Brest: the world’s largest maritime festival in photographs by Nigel Pert & Dan Houston with a … END_OF_DOCUMENT_TOKEN_TO_BE_REPLACED