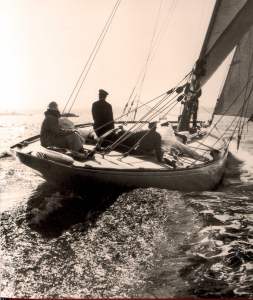 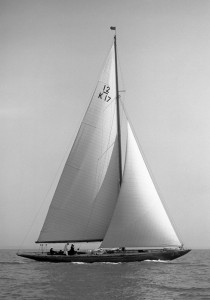 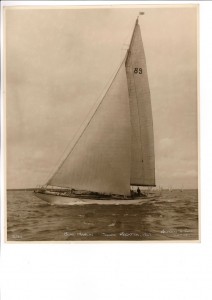 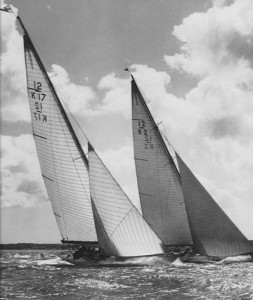 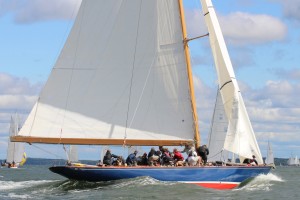 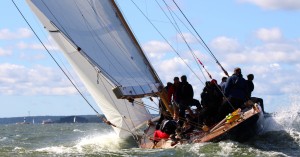 Ms. Carstairs was known as a powerboat racer and won the Harmsworth Trophy in 1928. She never took possession of the yacht but sold her before she was launched to C.E.A. Hartridge in 1937.

The barrister, Charles Eric Addington Hartridge renamed the yacht K2 ‘Alanna’ and her home port was Portsmouth. The C&N plans for #454 are also labeled ‘Alanna’, so his purchase of the yacht must have happened quite early in the building process. There is another 12-Metre ‘Alanna’ not to be confused with this one!

He started 7 times out of Portsmouth in 1937 and scored one third place.

“And so the 1937 season came to a close in British waters, and with America building up a similar class the future looks very bright for the “twelves”, as it should, for they are lovely little ships, large enough to give a great deal of comfort aboard, and yet small enough to be tacked and gybed frequently, so giving the fun of sailing a quick and responsive racer, and this with their seaworthiness is largely responsible for the ever increasing popularity of the “twelves”.
© Uffa Fox: Racing, Cruising & Design, 1937

As the racing season came to an end in 1937 the yacht again changed hands. The new owner Sir Thomas Sopwith, was an English aviation pioneer as well as a celebrated yachtsman. One can only imagine from where Sopwith invented the name of the WWII fighterplane Hawker Hurricane, built at his airplane works. He renamed the yacht K17 ‘Blue Marlin’ and painted it “Endeavour-blue” for the 1938 season.

He raced against Trivia, Marina, Evaine, Little Astra and Flica. In 1938 the yacht started 11 times and scored 2 first places and 9 second places. It was a succesful year. (T.O.M. Sopwith was a busy man; he had lost the challenge for the Americas Cup in 1934 with Endeavour I against Rainbow 2 -4 and lost again in 1937 with Endeavour II against Ranger 0-4.)

In 1939 the yacht performed well. Although dismasted at the beginning of the season, she was third overall after Vim and Tomahawk with 6 firsts, 2 seconds and 3 thirds; she was considered to be a fast boat; she was the only British Twelve to have beaten Vim in a real race by 13 seconds (Royal Albert Y.C. regatta at Southsea-August 9th). At the end of the season, Major Heckstall-Smith wrote (Yachting World September 8th, 1939)”…Now none had a career so interesting as that of Blue Marlin. Mr. Sopwith never did any good with her in 1938. Mr. Westhead brought her out late in the season which she begun by losing her mast and it was some time before there was an indication of her being any better than before. Mr Colin Newman steered her with considerable skill and as time went on Blue Marlin became a very formidable member of the Class. In very light airs, in particulary, she was good. She was a very fast “drifter”. There was races when she beat Trivia to windward in the latter’s weather, but I think Trivia was a little faster running.”

In 1939, according to Beken of Cowes photographs, the yacht’s hull was again white.

1946 the yacht was owned by Geoffrey and Ralph Hawkes.

1947 Blue Marlin’s owner was Mrs. J.W. Boumphrey. She installed an engine into the yacht.

In 1951 John G Fairweather owned her.

In 1951 Ippolito Berrone from Genoa in Italy became the owner of the Blue Marlin. Ippolite Berrone belonged to one of the most outstanding families of Genova and he himself was a former car racer in 1933-34 driving a Maserati 4 C. Ippolito Berrone himself shipped the Blue Marlin from England down to Genoa. Two officers of the Italian Navy were part of the crew. One of them was Mr.Faggioni. It is said that a log book has been written by the owner, but it has been lost. The yacht was remeasured as a R.O.R.C. racer in 1953 and registered as I1309. She dissapeared from Lloyd’s register. Blue Marlin’s mast was shortened and the yacht was used for extensive cruises.

In the sixties she recieved a new wooden mast. It has the same dimensions as the original but has a greater diameter.

In 1998 Rosella and Andre Colussi, children of Alessandro Colussi become the owners of the yacht. She recieved two new engines in 1999 and was kept at Izola in Slovenia, close to Venice, Italy. She was still sailing in 2001 but in need of restoration.

November 2006. Henrik Andersin becomes the new owner and moves the yacht to Kotka, Finland for renovation.

Part of the renovation work

2015 – She is back racing once again and attended the European Championships.

Much of this history is researched and written by Mr Luigi Lang, Genoa, Italy. The yacht has been mentioned in these publications:

Brest: the world’s largest maritime festival in photographs by Nigel Pert & Dan Houston with a … END_OF_DOCUMENT_TOKEN_TO_BE_REPLACED