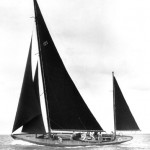 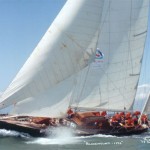 This famous yacht was built for Isaac Bell to the 12-Metre rule, but with a heavier and more powerful hull, and subsequently won the Fastnet race in 1939 with Charles Nicholson at the helm.

The Stephens brothers were responsible for the sail layout which was later modified by John Illingworth and Angus Primrose.

She became a ‘Royal yacht’ in 1963 and was said to be Prince Philip’s preference to ‘Latifa‘.

In 2006 she was nearing the completion of an 18 month restoration in a barn at Sturminster Marshall in Dorset, UK.    The project was undertaken by her owner, Tony McGrail of Poole.   The steel frames were replaced as well as 10,000 fastenings and 30% of the planking.   She was alongside at the 2008 Southampton Boat Show and attracted many classic yacht enthusiasts eagerly listening to the tails of Tony and his wife Cindy.

Brest: the world’s largest maritime festival in photographs by Nigel Pert & Dan Houston with a … END_OF_DOCUMENT_TOKEN_TO_BE_REPLACED