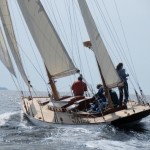 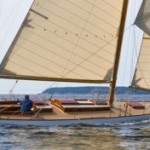 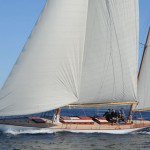 In the early 1930’s she was re-rigged to a fractional marconi yawl and an engine was installed to facilitate cruising.   Bernice was owned in the 1970’s by Edward ‘Ted’ Walker who raced her successfully on Lake Ontario from the Royal Canadian Yacht Club.   She was sister-ship to ‘Patricia’, pride of the RCYC fleet, commissioned by Commodore Norman R Gooderham who won the Richardson Cup with her in 1912 at the Chicago Yacht Club.

In the late 1970’s Bernice was sold out of the club.   She was restored by Rockport Marine in 2007/8 and upgraded for racing.   She continues to win prizes in many categories.

“I was Ted Walker’s foredeck crewman, responsible for sail changes and trim, on Bernice, in the summer of 1967.
I made the brass headstay fitting, mounted up on the bow. Ted was dismayed that the original hardware fitting was cracked, and unsafe, and was going to cancel the boat’s trip to the Kingston regatta. That would be embarrassing for a P-boat of Bernice’s stature and reputation. I had a machine shop at my disposal, so Ted dismantled the forestay and gave me the offending fitting, in the sincere hope that I wasn’t dumping a pile of male bovine excrement on him, about being able to make a new one to replace it, so that we could leave RCYC as planned on Friday morning. I did not dissappoint him. I spent Thursday night machining the replacement, and retrofitted it at the crack of dawn on Friday.
Bernice departed RCYC under sail, of course, around breakfast-time on Friday, untested and unproven. We were to race in a regatta that weekend, in Kingston, 140 miles due East of Toronto, on Lake Ontario. We sailed through the day and most of the night, in thirty-knot winds, and small craft warnings, rail down, with green water washing the lee deck. Ted never left the helm, and all onboard were exhausted when we dropped hook in Kingston. Wonderful wild ride. Ted and I were relieved, and very pleased that my new brass head-stay fitting worked admirably. It had endured a sustained arduous test that week. I suspect that my one-off fitting is still working
My parents were organizing a party the following weekend, so before leaving Toronto, on our way to Kingston, my mother asked Ted when I could be expected to return. He replied “whither the wind willeth, madam….wither the wind willeth”.
Bernice was historically engineless, as was my 6-meter ‘Kitsitta’. Ted and I were experts at leaving and returning to our moorings flawlessly, under sail alone. There were admitedly, some anxious moments, but never a misadventure. On one occassion, on a windless evening following a race, one of my crew paddled us back to the Port Credit Yacht Club, with his banjo. It still played, and was in tune, when we docked. No kidding. It partied on into the early hours, when our festivities were interrupted by a nearby sailboat that decided to scuttle itself. Our neighbour Harry, had a roaring party going on aboard his boat, but a land-lubber left the seacock to the head open. Harry’s sailboat was downed by the head. He was a slow learner, because it happened a second time that summer.” Brian A. Johnston

Brest: the world’s largest maritime festival in photographs by Nigel Pert & Dan Houston with a … END_OF_DOCUMENT_TOKEN_TO_BE_REPLACED