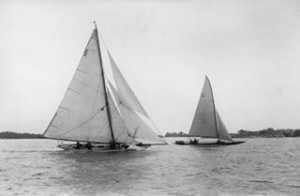 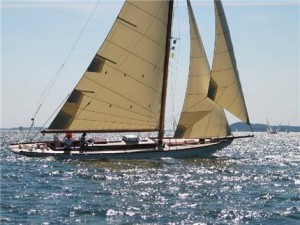 Beduin is an SL12 (sail length, a rule in Denmark and Germany preceding the International R-Rule). She was built for the manufacturer E Falk

In 1916 she left Denmark when the Swede Oscar Botolfsen, KSSS, became a new owner. She then sailed with different owners and some famous names.

1932-38 she was owned by FA Lindvall. Beduins name was then Sarita II and she was yawl rigged. He was a frequent guest in Sandhamn and, as an heir to Pommac, she lived happy days there.

A later owner used Beduin to get refugees from Poland. Maintenance and care suffered until 1970-80 when extensive renovations were made above the deck.

She remains very close to the original (except the gaff rig has been replaced) and she is still actively racing in the Stockholm area.

Brest: the world’s largest maritime festival in photographs by Nigel Pert & Dan Houston with a … END_OF_DOCUMENT_TOKEN_TO_BE_REPLACED