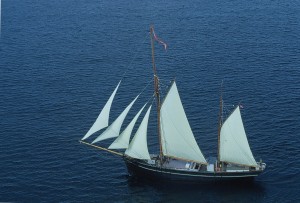 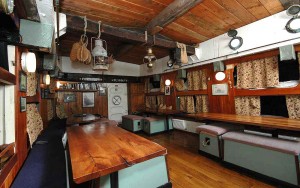 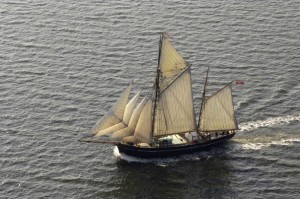 Bessie Ellen is one of the last surviving West Country trading ketches from a fleet that once stood at nearly 700. Bessie Ellen lived through an era when working sailing ships were an everyday sight in English ports and harbours.

In the summer of 1906 Bessie Ellen was seen by a North Devon home trade skipper, Captain John Chichester, who was looking to purchase his own ship. At 120ft long, and carrying up to 150 tons in her hold, she transported clay, peat, aggregates, salt and many other bulk cargos around the UK and Ireland.

By the Second World War, trade was slowly becoming scarcer with power driven vessels taking over from the sailing ship. Around the coasts ships were laid up to rot away, although some were kept for barrage balloon service, anchored off shore with little or no maintenance done to them, so by the end of the war they were irreparable. Luckily, with Mrs Chichester’s’ hard work and perseverance, Bessie Ellen found enough cargoes to keep her sailing right up until 1947 when she was purchased by Captain Møller from Frederiksvaerk in Denmark.

With small wooden ships still very much in demand in the sheltered waters of the Baltic, Bessie Ellen began the second chapter of her life under the new name of ‘Forsøget’ (The Attempt). Sadly, even in Denmark sail alone was not profitable enough to run a ship. Bessie Ellen went through a radical transformation, the rig greatly reduced and a large Hundested single cylinder engine installed. Deck beams were cut and a much larger steel hatch was made to give ease of handling the cargo by use of machinery for unloading. Captain Moller did very well with the ship, continuing to run scrap iron cargoes well into the 1970s, until finally the ship became too small a capacity to be profitable.

Now back in Plymouth, nearly 100 years from the time she was built, Bessie Ellen has been restored to the graceful sailing ship she once was. With masts, rigging and below decks accommodation she can once again feel the wind in her sails.

Brest: the world’s largest maritime festival in photographs by Nigel Pert & Dan Houston with a … END_OF_DOCUMENT_TOKEN_TO_BE_REPLACED