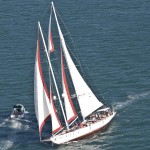 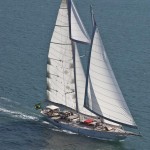 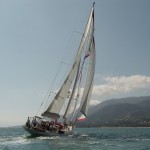 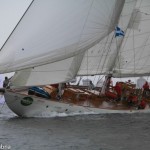 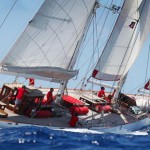 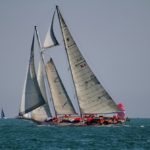 Previously named ‘Wildfire’ and one of the last builds of the Herreshoff family with the boatyard being sold the year after her launch. She was commissioned by then New York Yacht Club Commodore Charles Harding and the yacht went on to win the 1924 Schooner Cup and several other important regattas for Harding.

The yacht was sold twice more before being renamed Atrevida. She was first sold in 1950 to Jorge Bhering de Matos who sailed the yacht to Brazil, then to Dirceu Fortouta, where she spent four and a half decades entertaining influential guests out of Rio de Janeiro such as Elvis Presley, Rita Hayworth, Henry Kissinger, and many presidents of Brazil.

In 2002 and after many years of neglect the yacht was deemed scrap. However Gilberto Miranda, purchased her and she underwent a full refit and build at the MCP Yachts shipyard.

Brest: the world’s largest maritime festival in photographs by Nigel Pert & Dan Houston with a … END_OF_DOCUMENT_TOKEN_TO_BE_REPLACED