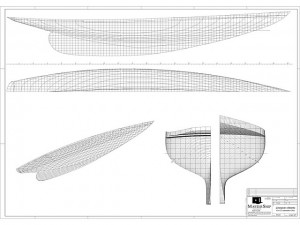 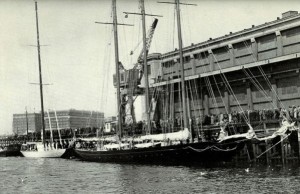 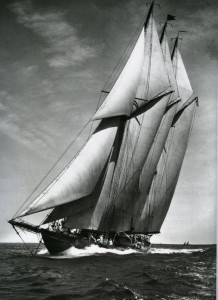 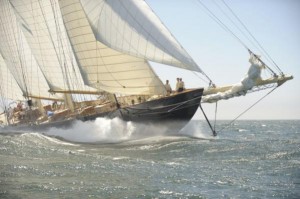 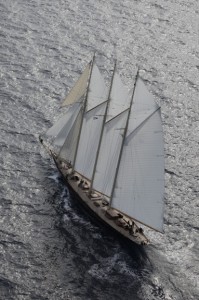 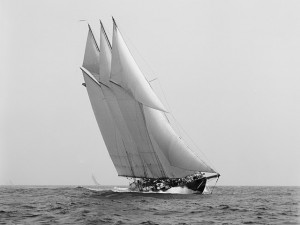 Commissioned by New York Yacht Club member Wilson Marshall, Atlantic was launched in 1903.  She was designed by William Gardner, one of America’s foremost designers of large yachts.  From the moment Atlantic went to sea, it was clear that she was an exceptionally fast and beautiful schooner.  When a yacht in 1903 hits twenty knots during her sea trials she is a promising yacht, but even then nobody could imagine two years later this yacht would set a record that would stand unmatched for almost a century.

Nevertheless, whilst Wilson Marshall wanted Atlantic to be the fastest schooner on the water, he felt there was no reason to compromise on comfort.  Unlike contemporary racing schooners, Atlantic was equipped with every imaginable luxury.  Fitted out with the finest mahogany panelling, she had two steam driven generators to power electric lights, refrigerators and a large galley.  On deck her halyard winches and primary sheet winches were also steam driven.  She had two double and three single staterooms, a lobby, a large full beam saloon, a dining room, a chart and gunroom, three large bathrooms and, in the deckhouse, there was a comfortable observation room. She had retractable chimneys, so while under sail the below deck steam heating, lighting and refrigeration systems could keep running.  Atlantic’s fo’c’sle accommodated her thirty-nine strong crew and officers, who would live aboard throughout the year.

During her first season Atlantic proved fast, winning both the Brenton Reef and the Cape May Cup hands down, but it was only in 1905 she made the headlines by winning the Kaiser’s Cup, a Transatlantic race from Sandy Hook to the Lizard.  Referred to as The last Great race of Princes, the entries for this race included all the yachts that the rich and powerful from Britain and America could send to sea.  The legendary Captain Charlie Barr, who had already successfully defended the America’s Cup three times, was hired to skipper Atlantic. Charlie Barr’s determination to win was as legendary as his skills for driving the largest of yachts to the very limit.  And win, he did, sailing 3006 miles in 12 days, 4 hours, 1 minute and 19 seconds.  Atlantic’s 24-hour record was 341 miles, an average speed of 14,1 knots. Uncountable attempts were made to break this record but it would hold firm until 1998, the longest standing speed record in the history of yachting.

Atlantic’s story continued for another seventy-seven years with ownership passing through the likes of Cornelius Vanderbilt and Gerald Lambert.  She was used as a mother ship for other racing yachts like Vanity, for America’s Cup defenders and the J-Class Yankee on her voyage to England. Her guest book included the rich and famous of the world.  Simply put, she is the most famous and beloved racing schooner of all time.

Although after World War II Atlantic would never sail again, she refused to give up her existence. Somehow she was saved from the scrap yard on three different occasions, broke loose from her moorings, to sail back to sea without a man aboard and ended up being used as a houseboat, a restaurant and a floating dock at a fuel station. Finally on 30th of January 1982, she was broken up at Newport News Boat Harbor, Virginia.

Over three years of technical and historical research resulted in sufficiently detailed plans and information to enable a highly accurate and authentic recreation. Having set a new standard with his creation of Eleonora, Ed Kastelein built on his vast experience and has once again constructed a yacht that no-one thought would ever sail again. The project was certainly his most ambitious;  with her length over deck of 185 feet (56 metres) she is the largest classic racing schooner ever to be recreated.  Ed Kastelein was determined for her to be the way she was when she wrote history in 1905, her original lines were honoured to the finest detail and her sail plan is identical to that of her victorious 1905 Transatlantic Race which made her immortal in yachting history. 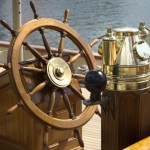 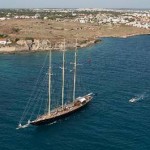 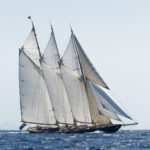 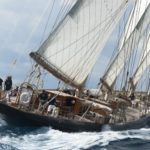 Above all, she is again breathtakingly beautiful, turning heads wherever the wind takes her.  Her graceful sheerline and long overhangs accentuate her grace while her waterline length of 42 meters and narrow beam are a promise of unmatched speed under sail.  Her spars tower some 45 meters above the waterline and support a staggering sail area of 1750 msq, more than two and a half times that of the already awesome J-Class yachts. 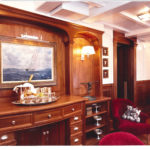 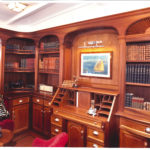 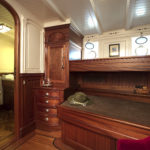 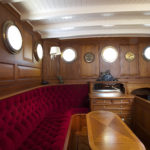 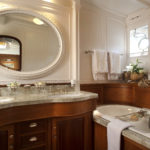 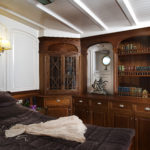 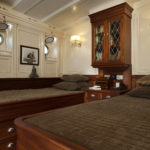 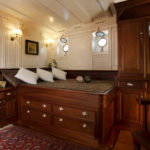 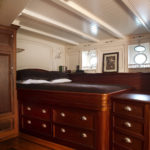 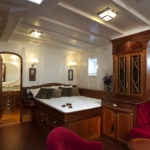 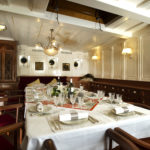 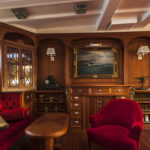 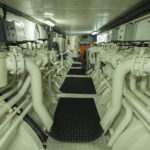 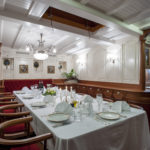 Atlantic has been for sale ever since her build and in late 2013 was ‘chartered’ for a number of years by a Greek shipping tycoon. With previous Mariquita Captain Jim Thom at the helm Atlantic left for the Caribbean for a round-the-world trip. 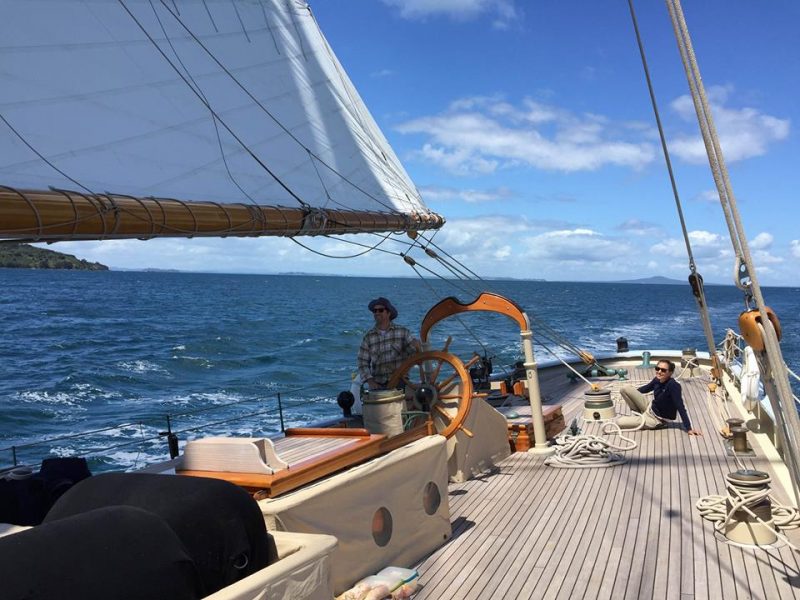 At the end of 2017 Atlantic’s charter ended and the yacht was returned to Ed Kastelein. 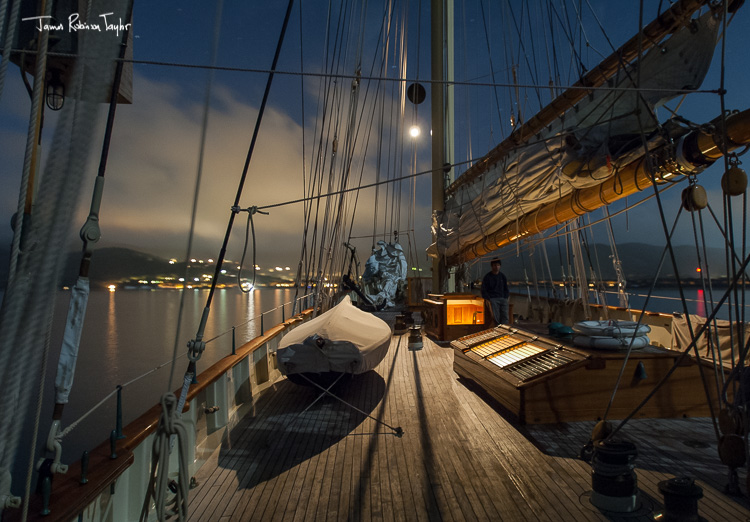 The schooner Atlantic lying off Punta Ala (Tuscany) in April, 2018. @James Robinson Taylor

Brest: the world’s largest maritime festival in photographs by Nigel Pert & Dan Houston with a … END_OF_DOCUMENT_TOKEN_TO_BE_REPLACED