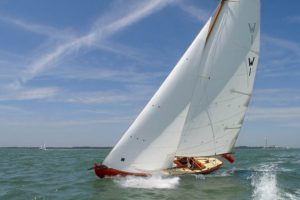 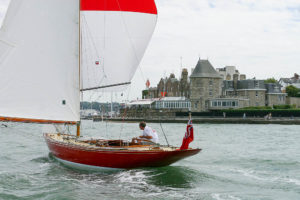 Previous names include ‘Huahine’ and ‘Dart’.

“Arrow has been sailing in the Med since 2003 in the Classic yacht regattas at Antibes, Cannes and St Tropez.  She did return to UK shores in 2004, winning her class for the 80th Anniversay at Cowes week where West Solents had their own Class start.

She won the British Classic Yacht Regatta overall in 2003 and the Moonbeam Trophy for the Round the Island race in the same regatta.”

“We returned to the Med for 2 seasons in 2005-2006 based in Antibes and competed in Voiles d’Antibes and Voiles de St Tropez, returning to the Uk in 2007 to sit out the season. Returning to the water in 2008 we were 1st in class and 2nd overall from 50 boats in the Levington Classics(suffolk UK).   St Tropez was also on the programme where we were 3rd in class, only losing the top spot in the last race by about a minute.  It was the best Volies de St Tropez yet. Back in the uk for a refit over the winter 2008/9 Arrow is looking better than ever and has just once again completed the Levington Classics scoring 1st in class and 2nd overall”.

Brest: the world’s largest maritime festival in photographs by Nigel Pert & Dan Houston with a … END_OF_DOCUMENT_TOKEN_TO_BE_REPLACED