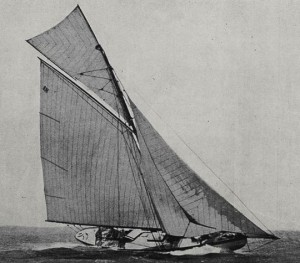 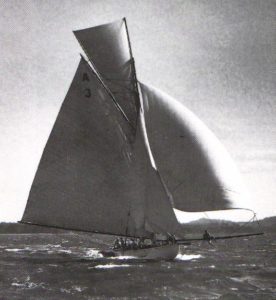 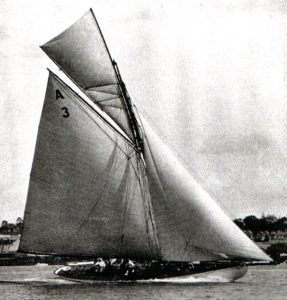 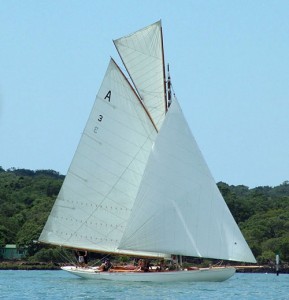 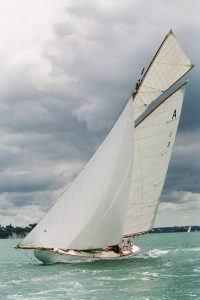 Ariki, meaning Chief or leader in Maori, is one of Arch Logan’s big four (the others are Rainbow, Iorangi & Rawhiti). Commissioned by Charles Horton of the Horton publishing family as a combined racing and cruising yacht in 1904, Ariki has been an impressive sight on Auckland Harbour for over a century. 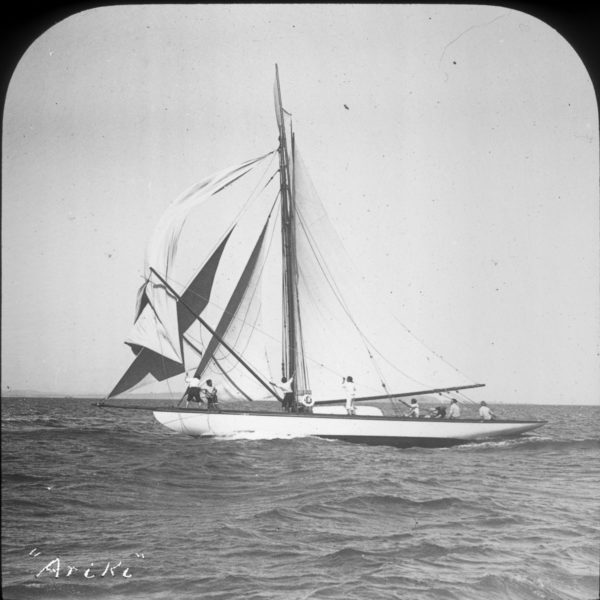 Since her launch she has dominated ‘A Class Yachting’ and has been a regular feature of the revived A Class series in recent times.

“A syndicate consisting of Warwick Jones, Rodger Duncan, and Peter Blundell purchased her on 30 March 1977.  They found her deck and beams were in poor condition. Taken to a shed in Clevedon she emerged after four years with a replaced deck, restored skylight, cabin top, cabin interior and coamings, while the engine was shifted forward to improve her balance.

She was returned to the water in January 1981. As Duncan and Blundell had their own boats, the syndicate eventually broke up, with Jones becoming the sole owner. 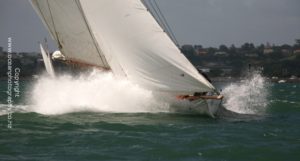 Yachts competing in the Lindauer Classics regatta, 2008. Strong breeze with gusts up to 35 kts. 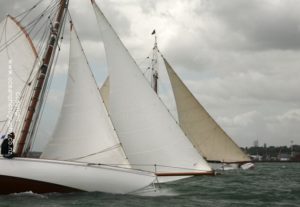 Warwick Jones died in 2012 leaving Ariki’s future unclear. In December 2016 Andrew Barnes purchased her from Jones’ widow and started a new restoration, led by the experienced wooden boat builder, Robin Kenyon in April 2017 at Okahu Bay in Auckland. The rest they say, is history.

Ariki was on the market for three years before Andrew and Charlotte Barnes purchased her. Barnes has a reputation for looking after those less fortunate, and Ariki fell into that category for the businessman.

The 18 month restoration which took place at Okahu Bay in Auckland, was led by boat builder Robin Kenyon and a dedicate team of artists.

“It’s been a very long journey to get to where we are today,” said Kenyon at the official launching of the restored Ariki on Sunday 29th April at the Maritime Room of the Auckland Maritime Museum.

“When you have owners like Andrew and Charlotte who just provide everything required to do such a job, it makes the overall experience more rewarding. We were able to get what we needed without fuss, and as a result, we have a beautiful piece of New Zealand maritime history back on the water,” said Kenyon.

“I will be thrilled when I see her sailing this week,” continued Kenyon.

Andrew Barnes is also excited to see his restored Ariki back on the race course.

“It’s going to take about 10-12 experienced sailors to race her properly and to take on Ranger,” said Barnes. “The goal is to compete in the Royal New Zealand Yacht Squadron Winter Series which kicks off this weekend and I can’t wait to take on Ranger and show her our transom,” he laughed.

“It will take a bit of time to get her up to speed, but Ariki is a racing yacht, sure she is a classic racing yacht, but we want to race her properly.”

“Ideally I would like to use the legacy of Ariki to encourage young sailors back into classic yachting. There is something very special about racing on an old boat, and I think it’s important that the young generation understand where the technology of racing today originated from. With that, I plan on running learn to sail classes on the boat, and use this to build a crew for the future,” said Barnes.

Barnes was adamant that Ariki would not become a museum piece.

“I want to see Ariki racing on the Watitemata Harbour for years to come. And I can’t wait to show Ranger our transom. Have I mentioned that yet?!” laughed Barnes.

Robin Kenyon was equally excited about her future racing.

“Restoring Ariki was a bit of a religious experience for me, and now I just want to see this famous sailing yacht back where she belongs. We have no winches, it’s all human power. Wait until people see the balloon jib sheet inside the staysail. It will take about 6-8 people to pull the mainsheet in in 15 knots, but hey, we love a challenge!” said Kenyon.

114 years after her initial launch, Ariki will be back racing with her first outing being the RNZYS Winter Series race on the 5th May.

Signing off from the official launch, Barnes congratulated Kenyon and his team on an outstanding restoration of Ariki.

“There is heart and soul in this boat,” said Barnes.

All they need now is salt water to start her next journey, and 114 years after her initial launch, Ariki will be back racing with her first outing being the RNZYS Winter Series race on the 5th May.

Brest: the world’s largest maritime festival in photographs by Nigel Pert & Dan Houston with a … END_OF_DOCUMENT_TOKEN_TO_BE_REPLACED