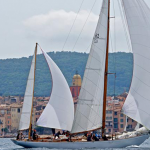 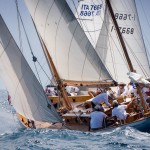 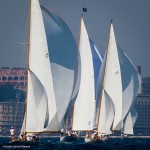 More recently owned by the Welsh comedian/actor Griff Rhys Jones and raced competitively in the Mediterranean classic yacht regattas from 2010 onwards.  In 2013 Griff Rhys Jones organised an S&S yawl event in June on the island of Elba, quickly nicknamed ‘Yawlba’.  5 yawls turned up to the first event which Argyll won.

More information can be found at the yachts website.

The start of 2015 saw Argyll join the Panerai Transat Classique and finish a very respectable second on handicap only to be beaten by the 39 m 1929 Fife design Altair in a crossing that boasted schooner weather.

Next, Antigua Classics and the Fastnet Race.

Brest: the world’s largest maritime festival in photographs by Nigel Pert & Dan Houston with a … END_OF_DOCUMENT_TOKEN_TO_BE_REPLACED