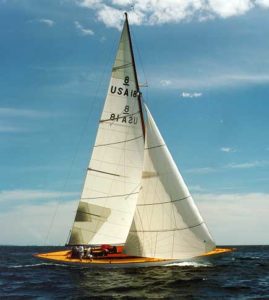 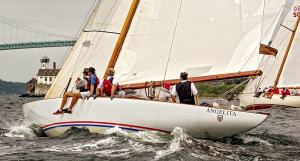 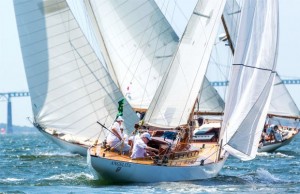 Angelita was the first American boat to win an Olympic Medal (Gold, Los Angeles Olympics, 1932, Owen Churchill, Skipper) and went on to compete in the 1936 Olympics in Kiel Germany in 1936.

In 1982 she was discovered in a shed in Santa Cruz, California, in derelict condition, purchased by a group headed by Peter Uberoth, and restored. Angelita served as the flagship for the 1984 LA Olympics.  The restoration, while first-rate by 1984 standards, involved the application of a veneer to the hull which ultimately changed its characteristics.

Angelita was purchased by Glenn Kim, who brought the boat to Maine and sailed there for several seasons. Dissatisfied with the performance of the restored hull, Glenn decided to utilize whatever he could from the original boat and build a new hull. William Cannel of Camden Maine completed the rebuild in August of 1997. There were no design changes involved in the rebuild.

Angelita is currently owned by Henry Skelsey  and Samuel Croll(2017).

Brest: the world’s largest maritime festival in photographs by Nigel Pert & Dan Houston with a … END_OF_DOCUMENT_TOKEN_TO_BE_REPLACED