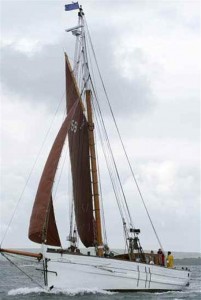 Angele Aline is a Dunkirk Little Ship with a remarkable, romantic history.  She is a ‘Dundee’ – a French corruption of ‘Dandy’ – the name given by British East Coast fishermen in the 1860s to an elegant new type of ketch later adopted by the Fecamp yard where Angele Aline was built.  Jules Talleux and his two partners ordered her as a sturdy sailing trawler to go as far as Newfoundland and Iceland for cod, and to follow the shoals of herring off the Scottish coast in summer to Normandy in winter.  The barrels in which the catch was salted down in her spacious hold did double duty as floats for the trawl.

She was named Jean when she was launched on 3rd November, 1921. Fifty-five feet long, with a 17ft. beam and 8ft. 6in. draught, she is carvel built of 1 3/4in. oak planks on oak frames and with 3in. teak decks.  Her handsome rounded counter stern and beautiful, yet rugged lines can be appreciated in Leonce Bennay’s model.  It was he who built her nearly 70 years ago and his detailed hand-written notes survive to this day.

When she first went fishing from the port of Gravelines, just West of Dunkirk, she had no engine, but was towed out to sea where she would hoist her brown gaff mainsail, mizzen, gallant topsail and two foresails on her way to the distant fishing grounds.  Later she was fitted with a succession of powerful diesels, which enabled her to fish under power, and her sails were used less often.  She belonged to various members of the Talleux family and was then sold to a Gerard Schollaert of Nieuport, who named her Angele Aline – the Christian names of his twin daughters. He had her until 1948 and so was her owner at the time of Dunkirk.

During the night of 28th May 1940, when she was sailing from St. Valery en Caux, where she had gone for a new propeller, she was commandeered by the French navy to assist in the evacuation.  She must have embarked her passengers in the port of Dunkirk, because her deep draught would not have allowed her to come close to the beaches.  There is no record of the number of trips she made – presumably ferrying troops from the harbour to the warships anchored in deep water off the coast.

Her next record tells that she was sunk by British aircraft while fishing off St. Vaast-la-Hougue in 1941.  Permission was given by the Germans to refloat her on 17th April and they used her to blockade Nieuport harbour entrance in 1943.  Later she was allowed to continue fishing, sometimes carrying German guards to prevent her being used by the Resistance.  One of her guards once caused her to be stuck high and dry on top of some submerged piles in Nieuport harbour, when the tide went out, by dictating which course she should take.  There she remained until the incoming tide refloated her.  No damage was done, except to her guard’s pride.  Mean-while someone ashore risked his life by taking a photo of the shaming event.

After the war Angele Aline continued as a fishing boat under several owners, until she was sold in 1963 to a Dutch couple, Binne and Dagmar Groenier.  They fell in love with her, and not only restored her to her former beauty as a splendid gaff ketch, but converted her into their floating home.  They lived and brought up their children in Angele Aline over the next 20 years, often sailing her along the coast and across the channel until one day the children demanded to “live in a proper house ashore, like other children.”  The Groeniers sold Angele Aline to Gareth Wright, an Englishman who brought her to London and St Katherine’s Dock.

It was then that she was spotted by George and Meriel Thurstan and it was again love at first sight. He took some pictures and then returned home to his wife to say: “I’ve found my dream boat”.   It was three years before he could buy her.  Meanwhile she sailed thousands of miles, taking part in some of the Tall Ships Races, including two crossings of the Atlantic.  In December 1984 they realised their dream and spent the next eighteen months on a major programme of restoration before leaving England in their new home during May 1987 to start a voyage around the world.

In 1990 the Thurstons brought Angele Aline back to the United Kingdom and her present owners, Neil and Jenny Attenborough, spotted her.  To quote Jenny Attenborough, it was the wood-burning stove and the teddy bear in the corner that really tipped the balance!  It was purchased from the Thurstons and sailed from Falmouth to the Solent to commence a re-fit. This proved to be more dramatic than the survey originally indicated in that it became necessary to replace 80% of planks, 60% of frames, all beams, 40% of deck, stringers, both masts, all spars, main engine, electrics and all fittings. At one point, it became necessary to remove the concrete and iron ballast because live gribbleworm was found between the oak and the concrete.

It is extremely rare for anything to live in the dark and black waters created by the oak and since there was no penetration through to the outer hull, it must have meant that the gribbleworm entered the boat whilst she was sunk during the Second World War. She now has a new pilot house and a new coach roof to go with all her new rigging and spars and has sailed amongst the Western Irish Islands for the past three years.

Angele Aline is one of the fortunate Little Ships.  To begin with she was built to last. Her oak planks and frames still bear the marks of her trawling hawsers; honourable scars which witness her early years as a working boat earning her living in all weathers way out in the Atlantic. But inside she has all the comforts of a home and she is pampered with constant caring, coats of varnish and new paint.  Her sails though in traditional brown are now made of long-lasting Duradon, but her blocks and bowsprit are in traditional gleaming wood. Her baggywrinkles protect her mainsail from chafe and contribute to the lovely look of an old-timer.

Information courtesy of the ‘Association Of Dunkirk Little Ships’.

Brest: the world’s largest maritime festival in photographs by Nigel Pert & Dan Houston with a … END_OF_DOCUMENT_TOKEN_TO_BE_REPLACED