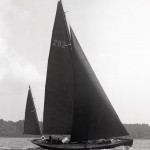 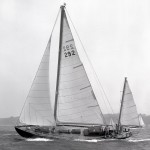 Named after a white bird with a slender red tail, which is found in New Zealand, Major Ernest S. Harston’s auxiliary cruising yawl proved to have a fine turn of speed when sailing, and a most satisfactory performance under power.

Later she was acquired by the late author, George Millar in the early 1950s and made famous by the book “Oyster River”. Later, after 10 years on the Clyde she was sold again, heading for the Mediterranean before returning to England for her first major refit from 1979 to 1982.

After a voyage to the Caribbean in 1984 and under new ownership, Amokura benefited from a second major refit 1996 – 2000. Her interior was altered and rebuilt in very high quality light oak. All systems were replaced including water tanks, waste and fuel – the boat was rewired and the engine replaced. The rig was also overhauled by Spencers and new stainless steel chain plates fitted. The hull also saw considerable work; planking enhanced, topside seams re-splined, and below the waterline seams re-caulked.

Brest: the world’s largest maritime festival in photographs by Nigel Pert & Dan Houston with a … END_OF_DOCUMENT_TOKEN_TO_BE_REPLACED