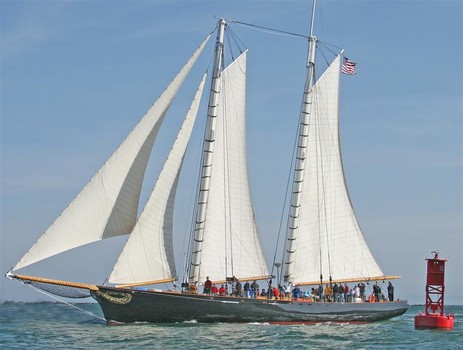 The original America was designed by George Steers back in 1851. In her first year,  on 22nd August,  she won the 100 Guinea Cup which subsequently became the famous America’s Cup.

“The first replica of America was built by Goudy & Stevens Shipyard in Boothbay, Maine and launched in 1967. She was built for Rudolph Schaefer, Jr., owner of F. & M. Schaefer Brewing Co. Construction was supervised by her first skipper, Newfoundland born Capt. Lester G. Hollett.” – WIKIPEDIA

Designed this time by Olin Stephens who researched the original Steers plans. The same year she also starred in the film, ‘Sail to Glory’ by Rudi Scharfer. Later she went on to have a refit in 1996 in English Harbour, Antigua.

Brest: the world’s largest maritime festival in photographs by Nigel Pert & Dan Houston with a … END_OF_DOCUMENT_TOKEN_TO_BE_REPLACED