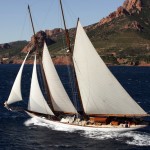 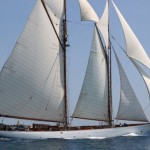 Commissioned in 1929 by Captain Guy H MacCaw whose brief to William Fife was simply:  ‘build a sound, safe cruiser, safe to go to the south seas islands in with no anxiety’. Fife was then 73 years old and this would be one of his last large yachts.

She was restored at Southampton Yacht Services from 1985-87 by skipper Paul Goss and one of the Fairlie Restorations creators, Albert Obrist. Altair truly set the standard for all subsequent classic yacht restorations.

She spent time in a yard again in 1999 at Cantieri Beconcini in La Spezia, Italy, under the ownership of a Spanish banker, and was a regular at the Mediterranean regattas often seen fighting with the schooners, Mariette and Orion and the ketch, Thendara.

In 2005 Altair was sold to an American Hollywood film producer and was seen out again on the Mediterranean circuit giving ‘Mariette’ a good run for her money.

2015 – After many years based out of Cannes and undertaking short Mediterranean cruises Altair headed for the ocean again and raced across in the Panerai Transat Classique with fellow Fife schooner Adventuress amongst others. With a great following breeze, often between 30 and 40 knots, Altair made the 3000NM crossing in 13 days and 3 hours and won the race.

Brest: the world’s largest maritime festival in photographs by Nigel Pert & Dan Houston with a … END_OF_DOCUMENT_TOKEN_TO_BE_REPLACED