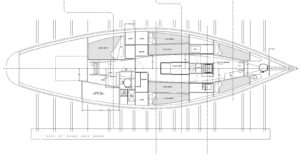 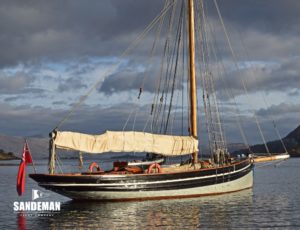 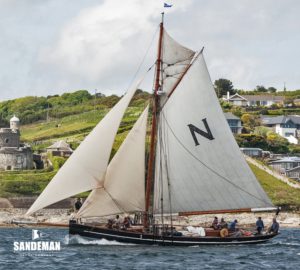 ALPHA’s story offers a fascinating glimpse into a period in the late 19th and early 20th centuries when the design principles of handy and fast commercial sailing vessels and private pleasure yachts were overlapping and feeding between disciplines. Commercial designers / builders were learning from the rapidly developing understanding of what makes a sailing yacht fast and weatherly, and as the sailing pilot and fishing craft improved, their desirability as a model for trusty, short-handed cruising yachts became legend – and remains so.

ALPHA’s designer, William Stoba of Fleetwood, Lancashire, had never built a pilot cutter for the notorious waters of the Bristol Channel before being commissioned by her first owner, William Prosser of Newport but Stoba had gained an enviable reputation for the design of his fast Morecambe Bay Prawners and Lancashire Nobbies – and some fine yachts. Prosser was prepared to take a risk on Stoba in order to steal a march on his competitors: to be first to the ships requiring pilotage, time and again.

So ALPHA, with her typically “Prawner” cutaway and rounded forefoot profile, is a little different from Bristol Channel Pilot Cutters by other designer-builders, and that feature is credited for her famous turn of speed, particularly in light winds. That she was successful is proven by her retention by Prosser for 20 years.

As sail gave way to power in the between-the-wars pilotage world, it’s no wonder that vessels like ALPHA became sought after as superb cruising yachts: in their working life they’d had to be fast and manoeuvrable, and comfortable hoved-to when spending long periods at sea on the lookout for paying work.

Her life as a pleasure craft began as the renamed BLACK BESS in 1924 under the ownership of Royal Cruising Club flag officer Sir Sidney Rowlatt. According to John Buchan, author of “The 39 Steps” Rowlatt had a “boyish zest for sailing… in the gusty channel”. It is known from the log of the Bristol Channel Pilot Cutter CARIAD that in August 1926 she met BLACK BESS (ex ALPHA) off Dodman Point; and to quote from the log, BLACK BESS then “sailed away from CARIAD”.

A succession of owners from the 1930s, when she regained her original name, to the near present succumbed to her charm and ability – and her demands for just deserts – to ensure her survival into the new world of love and care for wooden boats that arrived in the 1980s.

Her present, very experienced traditional boat owners were looking specifically for a Bristol Channel Pilot Cutter at a time when ALPHA was luckily available. After her major restoration they have honoured her past life, more often than not by sailing her easily short-handed and successfully racing her fully crewed – just as she was in her earlier working life.

It is true to say though that her superb present day accommodation, whilst honouring the layout and spirit of her working days, offers rather a lot more comfort than her pilots and crew would have enjoyed in times past.

Brest: the world’s largest maritime festival in photographs by Nigel Pert & Dan Houston with a … END_OF_DOCUMENT_TOKEN_TO_BE_REPLACED