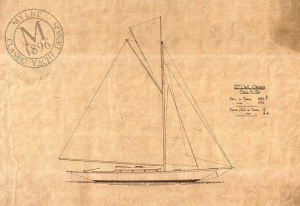 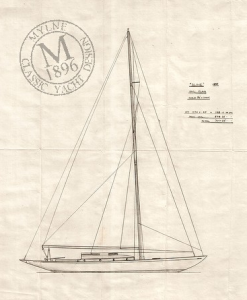 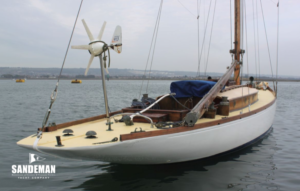 Drawn both as a gaff cutter and bermudan sloop.

Information courtesy of Trevor Sellers and the Mylne Online Archive.

According to Scottish author John Buchan (‘The Thirty-Nine Steps’), when ALINE’s first owner, British colonial service diplomat Gerard Craig Sellar, inherited the vast Scottish west highlands estate of Ardtornish in 1909, its potential for water-borne sport interested him much more than the hunting, shooting and fishing usually associated with such places. In his 1929 Spectator obituary of his great friend, Buchan wrote:

“For shooting and fishing he did not care consumingly, his prime interests lying rather in public affairs and the human comedy. The one exception was sailing. The ‘wet-bob’ tastes which he had learned at Eton and Balliol never left him.”

Not only did Sellar inherit a beautifully wild 40,000-acre estate set in the magnificent sailing waters of the Firth of Lorn and the Sound of Mull; it came replete with the stately 1902 Cox and King-designed 180 feet, 555-ton steam yacht RANNOCH – so stately that in later life she would become the Italian Royal Yacht.

Sellar wasted no time in creating his own flotilla with the addition of this beautiful Alfred Mylne-designed gaff cutter, ALINE – like RANNOCH, named after one of the two estate rivers that flow into wonderfully sheltered Loch Aline – and the 43-ton Forrest & Co of Wivenhoe steam yacht MORVERN. Both smaller yachts were launched in 1909, with MORVERN acting as tender to ALINE and servicing the relatively remote estate as transport, and tender also to shooting parties – especially when RANNOCH cruised in warmer climes.

During the later years of her long period of residence on the Firth of Clyde into the late 1970s, ALINE was assumed by many (and in fact still appears thus in handicap tables) to be one of the “Clyde 30s”, a restricted Linear Rating class of such local popularity in the early years of the 20th Century that the International 8-Metre (8mR) class never truly came to the fore there until well in to the 1920s. The best known modern survivor of that class is the Fife designed and built MIKADO, well known on the Solent and as a regular attender at The Fife Regatta. Although there are in fact many similarities, ALINE was not built to race with the Clyde 30s, but her design seems undoubtedly influenced by them; like a “Cruising Clyde 30”. It makes sense: at the time of her design, the Mylne office was vying for Clyde 30 orders and honours with designs by William Fife Junior (III), and even their in-house designer (later Sir) Thomas Glen-Coats’s own efforts. The fact that Glen-Coats’s brother, Alexander Harold, became ALINE’s owner from the early 1920s until his death in 1935 may suggest a connection.

ALINE was originally a beautifully-proportioned gaff cutter with a modest jackyard topsail and kept that rig into her 7th ownership when in 1938 Alfred Mylne designed the equally handsome Bermudan cutter/ sloop rig she still sails under. Mylne was a master of rig design, and her present owner reports that she “sails like a witch”. ALINE is immortalised tramping across the Clyde off Gourock under this rig in Ian G Gilchrist’s book of late 1930s Clyde sailing portraits, “Call of the Wind”.

Aline on the hard 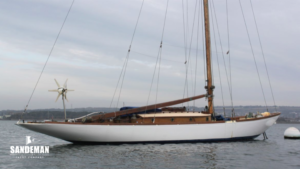 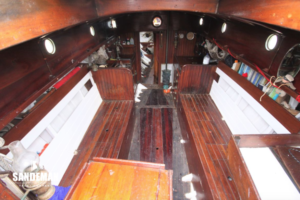 Apart from that rig change, and the earlier addition of a sensibly offset 2-cylinder Kelvin petrol auxiliary by post-World War One owner, Belfast Harbour Trustee William J. Jackson, multiple owners over her 110 years have thankfully altered ALINE little. Even 1980s damage from a Portsmouth boatyard fire, and the necessary restoration work undertaken under present ownership, did little to take away from ALINE’s wonderful patina of authenticity – so that she remains an Edwardian gem.

Brest: the world’s largest maritime festival in photographs by Nigel Pert & Dan Houston with a … END_OF_DOCUMENT_TOKEN_TO_BE_REPLACED