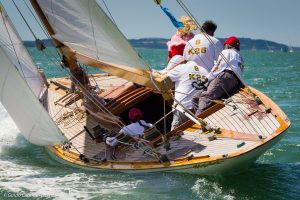 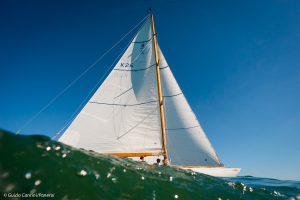 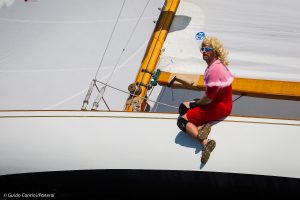 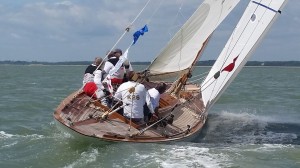 Built as a Royal Northern Yacht Club challenge for the Seawanhaka Cup so very hotly contested at the time. She was shipped to Oyster Bay, New York in 1931 and she won. Saskia returned to Britain where she raced very successfully in the Solent. There were nine 8-Metres racing on the Solent at the time and eight on the Clyde. A sterling silver model of the boat now resides in the Royal Yacht Squadron. She was chosen to represent Britain in the Berlin Olympics of 1936, the sailing events being held at Kiel. It is rumoured that in Kiel, Hitler came aboard the German 8-Metre that was competing there and also visited Saskia, commenting unfavourably.

Saskia raced hard and in 1938 alone she competed in over 50 races during the season. Sir William Northam bought the yacht and shipped her to Sydney, Australia, in order to win back the Sayonara Cup from Melbourne, the most prestigious cup in Australian big boat racing since 1904. Saskia won the regatta in 1955.

“She was owned by the Stephen’s family after the Northam’s and raced in Sydney harbour for over 20 years. In 2007 she was shipped by the Stephens to Scotland for the 8-Metre Worlds, the Centenary Metre Boat Regatta and the Fife Regatta, winning her division (sira?). After the 8-Metre Worlds in Scotland,  another Australian Michael Maxwell bought her (he also owned the 12 metre Gretel 2). He sent her to Portugal for extensive restoration work before selling her to the current English owners who campaign her in England and in Europe”.

She was refitted in the 1970s and continued to race.

She came back to the UK in 2007, having been refitted in Australia, and was purchased by her current owner(2015).

Brest: the world’s largest maritime festival in photographs by Nigel Pert & Dan Houston with a … END_OF_DOCUMENT_TOKEN_TO_BE_REPLACED