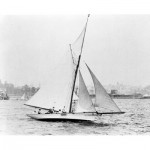 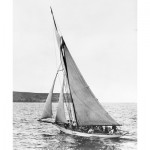 Built to the tonnage rules for yacht racing ‘Akarana’ had close connections with Australian yacht racing and recreational sailing from 1888 until the 1960s and is representative of the close ties between Australian and New Zealand yachting.
Designed and built in Auckland, she was shipped to Melbourne specifically for the 1888 Centennial International Regatta that was to be held later in the year. She won a lead up event and then one of the feature races on the programme, but faired poorly in another two races when gear failed early, on each occasion. She then came to Sydney for the Anniversary Regatta in 1889, and won the race for her class on handicap.
Logan then sold the boat in Sydney but the new owner and other subsequent owners used the ‘Akarana’ mainly for cruising. She was well known around Sydney Harbour and Broken Bay, and sailed up the Hawkesbury River toward Windsor on one expedition.
Over many years she underwent a number of changes to the keel, rig and layout. She was in a tired state when bought by the New Zealand Government in 1987. They funded a major restoration project and ‘Akanara’ became a Bi-Centennial gift from New Zealand to Australia in 1988. More research into ‘Akanara’s’ origins then uncovered new evidence of the keel and rig configuration when launched, so further restoration was done by the ANMM in 1997 and ‘Akanara’ now sails again on Sydney Harbour.
‘Akanara’ is part of the National Maritime Collection and on display at the Museum in Darling Harbour, Sydney.
Previous Owners John S Abraham,

Brest: the world’s largest maritime festival in photographs by Nigel Pert & Dan Houston with a … END_OF_DOCUMENT_TOKEN_TO_BE_REPLACED