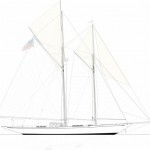 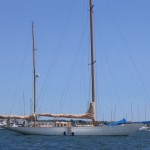 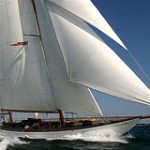 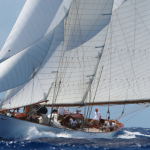 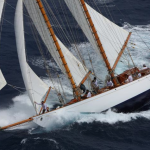 Built for Norman Clark Neill of London her original rig comprised a bermudan fore sail and a gaff-rigged main sail.

She has a lively history including being seized and used by the Germans as a patrol boat in World War II. Towards the end of the war she was scuttled at the entrance to Villefranche-sur-Mer, where she remained for several years. When she was raised she was rigged as a ketch.

She was extensively rebuilt from 2000-2004.   ‘This involved significant structural work, including replacing substantially all sistered white oak frames and refastening or replacing numerous other single frames. Approximately 85% of all frames have been replaced. There are new galvanized steel floor timbers, new silicon bronze keel bolts, new sole bearers and extensive replacement of deck beams and carlings throughout.   The stem, rudderpost, rudder and transom have all had repairs and the boat was recaulked throughout with new topside teak splines.   All mechanical, electrical and plumbing systems have been replaced.’

Adventuress ‘is currently owned by Jim Lynch of New York and is home ported in Newport, R.I.’

Launched after a restoration at Rockport Marine of Maine, USA on July 31st, 2012 and currently rigged as a Gaff Schooner.

She took part in the Panerai Transat Classique in 2015.

Brest: the world’s largest maritime festival in photographs by Nigel Pert & Dan Houston with a … END_OF_DOCUMENT_TOKEN_TO_BE_REPLACED