Yacht: A Day At The Races 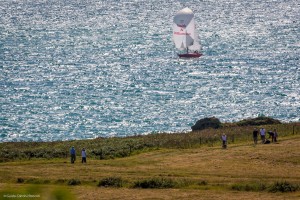 A day at the races

Designed for Owen Aisher to compete under the old One Ton Cup Rule, the boat’s original name was Yeoman XIV.

In 1967 Peter Nicholson helmed her in the Copenhagen One Ton Cup as one of three British boats.

Barrie Martin bought her in 2001, attracted by the pedigree, but particularly by her materials.

After 35 years at sea a major refit was called for. The work was carried out at the Agamemnon Boatyard at Bucklers Hard. All the structural and mechanical elements were replaced, including keels bolts, floors and a 13 foot long mast step. Most of the electrical components were replaced, along with the drive shaft. A new Yanmar GM20 was fitted.

Below the cooker and sanitary ware were renewed but the original mahogany shipwrighting was retained as far as possible.

The original Yeoman name was taken by Owen Aisher for his next boat. After that she was named ‘Quailo’ for three years, then ‘Dalcassion’. Barrie decided to call her ‘A Day at the Races’ to reflect her competitive history.

Brest: the world’s largest maritime festival in photographs by Nigel Pert & Dan Houston with a … END_OF_DOCUMENT_TOKEN_TO_BE_REPLACED