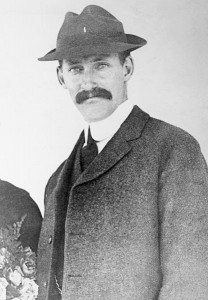 William Starling Burgess was born in Boston. He was the son of Edward Burgess who died when Starling was 12. Starling attended Milton Academy and Harvard University. He was a partner in Burgess & Packard in 1902 with Alpheus Appleton Packard. In 1905 he established a yacht yard in Marblehead, Massachusetts and began designing and building yachts and boats.In 1908 he became interested in aviation and in 1909 joined with airplane designer Augustus Moore Herring who had left Glenn Curtiss to form the Herring-Burgess Company. The Herring-Burgess Co. built the biplane Flying Fish, which flew over Plum Island on April 17, 1910. This was the second fully powered and controlled flight in New England. The first took place February 28 at Lake Chabbaco. Herring-Burgess built several planes licensed by the Wright Brothers. Norman Prince and his friends hired Burgess to build a plane for them to race in the Gordon Bennett Cup Race.In 1911 Herring left, and Greely S. Curtis and Frank H. Russell joined Burgess to form the Burgess Company. In 1912 the Burgess Company built their first hydroplane designed by John William Dunne and soon was selling the Burgess-Dunne hydroplanes to the U.S.Army and the U.S. Navy. In addition, the Royal Canadian Air Force purchased a hydroplane in 1914. Burgess received the 3rd Collier Trophy to be issued in 1915 for his hydro-aeroplane. With its 800 employees, Burgess Company became the largest employer in Marblehead.

At some point in this decade, Burgess designed what was almost certainly his most popular boat, the 14-foot “Brutal Beast.” Simple enough for inexpensive mass-production, the Beasts became the dominant instructional craft of Marblehead and other communities into the forties.When the U.S. entered WWI, the Burgess Company was sold to John N. Willys (who then sold it to Curtiss Aeroplane and Motor Company). Burgess joined the Navy, became a Lieutenant Commander and designed planes for the Navy.After the war he returned to boat design and construction and later designed three successful J-class yacht defenders of the America’s Cup: Enterprise in 1930, Rainbow in 1934, and Ranger in 1937.In 1922 he and A. Loring Swasey and Frank C. Paine formed the design firm Burgess, Swasey & Paine in Boston. Lewis Francis Herreshoff worked with them. They designed several yachts, including the Advace for John S. Lawrence, the Gosson for Charles Francis Adams III, and the ELLEN for Charles Foster.

In 1926 he dissolved Burgess, Swasey & Paine and joined the firm Burgess & Morgan, Ltd in New York City. In 1930 he was commuting to NYC and living in Darien, Connecticut with his wife Else and 2 children.Burgess was friends with Buckminster Fuller and was helped him when Fuller was designing and building his aluminum Dymaxion car.In 1935 he became a consulting naval architect for the Aluminum Company of America with his office at the Bath Iron Works, where he promoted the use of corrosion resistant alloys for ships. He designed the Alumette which was built at the Bath Iron Works. He also designed the sailing yacht Ranger with aluminum masts for Harold Stirling Vanderbilt and he worked closely with Geerd Hendel.During World War II he was employed as a civilian engineer and worked for the Anti-Submarine Development Detachment of the US Atlantic Fleet. In 1946 he was working at the Stevens Institute of Technology on damage control research.

Brest: the world’s largest maritime festival in photographs by Nigel Pert & Dan Houston with a … END_OF_DOCUMENT_TOKEN_TO_BE_REPLACED