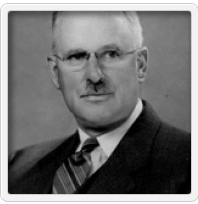 Sam Crocker has designed some of the most outstanding classic boats. First a disciple of the well known naval architect John Alden, he then won an enviable reputation quite on his own thanks to his very personal style. Amongst his many designs Mercury is perhaps one of his best achievements, according to Joel White, (the prestigious designer of the Class W traditional boats), as he himself states in the epilogue of the book published by Sam’s son, Sturgis Crocker, showing numerous photos and drawings of his father’s designs, where Mercury bears number 191.

It may be interesting to note that on Mercury C the initials SSC are scrolled into the hull near the bow, a signature for the designer.

Samuel Sturgis Crocker was born in Newton, Massachusetts, Match 29, 1890.  He attended the Massachusetts Institute of Technology, where he was a student in naval architecture.  For the next four years he worked as a draftsman with George Owen, a naval architect of Newton.  In 1916, Sam opened his own business in a small rented yard in Marion, Massachusetts, where he engaged in boat repairing, building and designing.   During th First World War, he was with Lawley’s Yard, Neponset, Massachusetts in charge of a construction crew responsible for completing the planking of nine 110-foot submarine chasers on a U. S. government contract.  In 1919, he was associated with Murray & Tregurtha, Quincy, in the building of F-5-L flying boats, and for the next five years, he was a designer and draftsman with John G. Alden in Boston.  In 1924, he established his practice as S. S. Crocker, Naval Architect in Boston, which was maintained there until 1956, when he moved the enterprise to the yard of his son, S. Sturgis Crocker, in Manchester, Massachusetts.  He continued his activities in designing and buildng at that location until the close of his life in 1964.

In the field of commercial craft, he designed fishing boats, trawlers and seiners, and in this field, he was skillful in planning for both speed and carrying capacity.  He assisted in designing the pontoons for the NC-4, a Navy craft which in 1919 crossed the Atlantic to become the first seaplane to achieve that flight.  During the Second World War, he was a full-time resident architect in the yard of Simms Brothers, Dorchester, Massachusetts, where he collaborated in the building of submarine chasers and army rescue craft.  During the Korean conflict he returned to the same yard as part-time resident architect to engage in the same type of planning and construction.

Brest: the world’s largest maritime festival in photographs by Nigel Pert & Dan Houston with a … END_OF_DOCUMENT_TOKEN_TO_BE_REPLACED