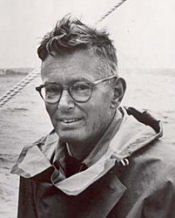 Stephens entered the Massachusetts Institute of Technology in 1926, only to be forced to drop out during his freshman year due to illness. Throughout his life, although he was a pioneer in scientific yacht design, he would say that he regretted his lack of training in mathematics and engineering. Yet Stephens had aptitudes that suited his calling. “I started my career with the tools of observation and intuition to which quantitative analysis has been gradually added,” he wrote in his autobiography. “Whenever possible I studied lines and tried to see the way shape was coupled to performance.”

By 1926 he was sailing regularly at Larchmont Yacht Club in 6-Metres, a restricted-design keel boat of about 34 feet LOA and the hot racing class of the day with top-flight sailor-designers like Clinton Crane and Sherman Hoyt. By 1928 he was working at a drafting table at home and, with the help of Norman L. Skene’s manual “The Elements of Yacht Design,” was teaching himself how to draw plans.

Stephens’s on-the-water observations of 6-Metres confirmed the value of that rule of thumb. His first published design, a Six, appeared in the January 1928 Yachting with these comments by the young designer: “In any design the most important factors of speed seem to be long sailing lines and large sail area, with moderate displacement and small wetted surface. Then comes beauty, by which is meant clean, fair, pleasing lines. Though per se beauty is not a factor of speed, the easiest boats to look at seem the easiest to drive.”

All this time Stephens was producing successful racing boats, including the winners of a total of eight of the nine America’s Cup matches between 1937 and 1980. Other than Ranger, the most remarkable of these boats was Intrepid, the defender in 1967 and, after alterations by Britton Chance Jr., again in 1970. She had a rudder separate from her keel to reduce wetted surface and improve steering. The separate rudder was not new, but Stephens made it work on a number of increasingly large ocean racers (most notably Thomas Watson’s Palawan) in the mid-60’s before successfully using it on Intrepid. 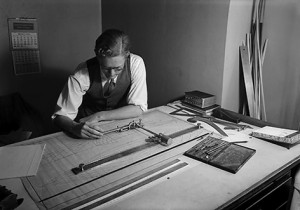 While designing America’s Cup defenders and ocean racers, Stephens also produced a number of powerboats, motorsailers and cruising boats. Stephens also was active in the design of day-racing boats, the best known of which is the Lightning, a 19 foot three-person centerboarder designed in 1938 and raced worldwide. Other successful day boats included the 13.5 foot Blue Jay (a small version of the Lightning), the 11.5 foot Interclub Dinghy and the 30-foot Shields keel boat.
After Drake Sparkman’s death in 1964, Olin Stephens shouldered the firm’s administrative burden. His chief assistants included his brother Rod, who supervised much of the rigging design and construction, and Gil Wyland. Olin often raced in boats he designed and was in regular attendance at Newport during America’s Cup summers. Beginning in the 1930’s, Stephens nurtured a creative, independent life ashore. He studied art and painted, played the piano and read and traveled widely. He and his wife, Susie, lived in a New York suburb where they raised two sons. On his retirement in 1978 (after designing or supervising the design of more than 2,000 boats or classes), the Stephenses moved to northern New England. Stephens continued his varied life into his nineties. At nearby Dartmouth College he took courses in mathematics and helped teach a course on sailing for engineers. He developed his computer skills, worked with a firm on software for studying aerodynamics, advised America’s Cup syndicates and traveled often and far to technical conferences and meetings of international rating rules committees. When Dorade was returned to her original form by a dedicated new owner in Italy in 1998, Stephens happily flew over and joined her crew as she won two out of three races. 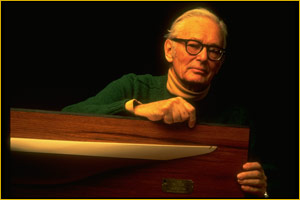 At the age of 90, Olin Stephens completed an insightful autobiography whose title — “All This and Sailing, Too” — neatly summarized his view of life. On the last page he wrote: “In all phases of my work I was conscious of the need for balance, and I did my best to find balance in both the long and the short view. Broadly I think I can say that I applied the principles of balance in design, in business and in the pleasures I enjoyed.”

Brest: the world’s largest maritime festival in photographs by Nigel Pert & Dan Houston with a … END_OF_DOCUMENT_TOKEN_TO_BE_REPLACED