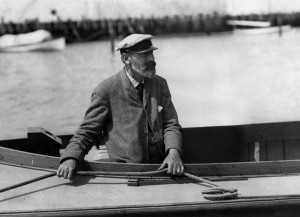 Every defender of the America’s Cup from VIGILANT in 1893 to RESOLUTE in 1920 was designed by Captain Nathanael Greene Herreshoff and built by the Herreshoff Manufacturing Company. Known as “the Wizard of Bristol,” Nat Herreshoff dominated yacht design for more than seventy five years. An innovator, not a traditionalist, Captain Nat designed the Cup defenders: VIGILANT, 1893; DEFENDER, 1895; COLUMBIA 1899 and 1901; RELIANCE, 1903; and RESOLUTE, 1920. Captain Nat trained as an engineer at the Massachusetts Institute of Technology, then went to work designing engines for the Corliss Steam Engine Company in Providence. He left to become a partner of his blind brother John, the founder of the Herreshoff Manufacturing Company.

In the 1880’s and 1890’s, the company produced steam launches and the first torpedo boats. Nat designed a sailing yacht, CLARA, whose performance was so remarkable that Commodore E.D. Morgan of the New York Yacht Club asked him to design two similar boats for him. Morgan was so pleased with PELICAN and GANNET, as they were called, that he asked Captain Nat to design a large yacht for him to the rules of a new racing class. The result was GLORIANA, a yacht that set the direction for the design of racing yachts for many years to come.

Captain Nat had equal success in designing both small boats and large, both power and sail. His power yacht STILETTO could cruise effortlessly at 20 knots and in 1895 made an eight hour run at an average speed of 26 knots. He also experimented with catamarans, the first of which was the U.S. patented, 33 foot AMARYLLIS.

In 1893, Captain Nat designed his first America’s Cup defender, VIGILANT, for the C. Oliver Iselin Syndicate. She was a 124′ centerboard sloop with a hollow board of bronze. DEFENDER was a 123′ keel sloop with light-weight, sophisticated construction of aluminum and bronze plating on steel framing. His COLUMBIA of 1899 and 1901, fitted with a telescopic topmast, was the only Cup defender to turn back two Cup challenges until INTREPID in 1967 and 1970. COLUMBIA was a 131′ keel sloop of Tobin bronze on frames of nickel steel. RELIANCE of 1903 was 143’8″ long and carried more sail on a single mast than any vessel of its kind ever built. Her sail area of 17,000 square feet was more than twice that of the J-boat RANGER and nearly eight times that of a twelve meter. On a reach, RELIANCE was the fastest monohull Cup defender of all time. RESOLUTE of 1920, a 106’3″ sloop was designed to the 75′ waterline length provisions of the Universal Rule, which Captain Nat developed several years earlier to replace the former Seawanakha Rule. After losing the first two races, she came back to defeat SHAMROCK IV 4-3.

Nat Herreshoff was also a genius in building hulls and fittings, which, while lighter than those of competitors, stood up to the work they were designed to do. No one had greater impact on keeping the America’s Cup in this country than Captain Nat.

Brest: the world’s largest maritime festival in photographs by Nigel Pert & Dan Houston with a … END_OF_DOCUMENT_TOKEN_TO_BE_REPLACED