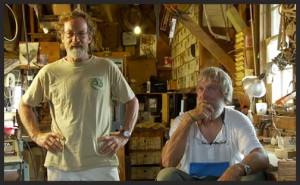 Nat Benjamin has been designing vessels, from dinghies, to daysailers, to cruising schooners, for more than thirty years. His designs are known for their speed, seaworthiness, practicality and simplicity. “In my few years of ‘messing about on boats’,” says Nat, “I have tried to include the basic ingredients for safety, speed, and comfort, with a strong emphasis on good looks. I am not concerned with any rating system; I prefer to see men, women and children sailing with a smile. I feel it’s very important to keep an eye on current trends, but not to be influenced by the glitter, only the grace.”

A statement from the designer:

“After more than thirty five years of continuous involvement with wooden sailing craft, I am more convinced than ever that a plank-on-frame vessel is the ultimate in yacht construction. Not only does this method produce an enduring vessel with integrity, heart and soul, but it also requires a process that is so ancient and noble as to inspire the builder to work above his ability, to continue challenging himself in his expression of the rarest combination of science and art. According to Webster, the word ‘classic’ properly defines a vessel designed and serving as a ‘standard of excellence’ with an additional caveat of equal import to be ‘enduring and traditional.’ In an age when ‘classic’ is so grossly distorted as to encompass an amorphous range of social unconsciousness from Coca Cola to a popular sitcom, we must remind ourselves of the real meaning of the word. A ‘classic yacht’ must represent a graceful and well-proportioned hull whose individual parts are not only enduring but are created by a traditional process of skill and inspiration. A classic yacht speaks to you in a distinct and compelling voice.”

Brest: the world’s largest maritime festival in photographs by Nigel Pert & Dan Houston with a … END_OF_DOCUMENT_TOKEN_TO_BE_REPLACED