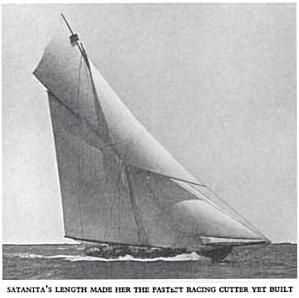 Joseph Soper is probably best remembered for the 131′ racing cutter ‘Satanita’, legendary for her speed. With 126t displacement, nearly 1000 square metres of sail area and about 35 regatta crew she was one of the smaller boats among the famous English ‘Great Cutter Fleet’. These ships were big yachts with fin keels, about 26m waterline, 10 metre long overhangs, and a regatta crew of about 50 men.

Beside GL Watsons Britannia, designed in 1892 and built for the Prince of Wales, William Fife’s Calluna, Weld’s Lulworth and the Valkyrie, the rather delicate Satanita was nevertheless known as ‘the fastest cutter on a reach ever built’ laying the foundation of Soper’s success as a naval architect.

Under her second owner, Sir Maurice Fitz Gerald, Knight of Kerry, a friend of the King and also an enthusiastic regatta sailor, the Satanita won the Queens Victoria Cup, Kings Cup in 1906, the Coup de la Mediterrane in Nice, the German Emperors Cup and the Squadron Cup. With her successes her designer became world renowned and socially accepted.

In spite of the former successes and reputations in the regatta scene he was already known as a designer and constructor of conservative lines and sail plans. However, Soper also knew very cleverly how to serve for the wishes of his prosperous clientele that came from nobility, industry and trade.

His work decisively influenced this first phase of yacht development.

Brest: the world’s largest maritime festival in photographs by Nigel Pert & Dan Houston with a … END_OF_DOCUMENT_TOKEN_TO_BE_REPLACED