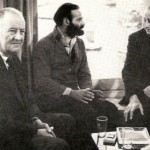 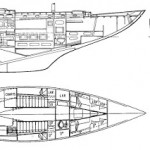 In 1958 John Illingworth opened his own yacht design business, in partnership with Angus Primrose. Together they created some of the most attractive and weatherly boats of the era. Illingworth’s role was to conceive the design in general, the rig, and the details of deck and interior layouts, while Primrose gave the hulls their sweet and efficient lines for speed, good seakeeping and beauty.
Many of the firm’s early clients were French. Illingworth spoke fluent French and loved the country. He encouraged and assisted in the founding of the enormously influential Glenans sailing school, where hundreds of young Frenchmen learned to sail – and to become instructors themselves. He was commissioned to design a yacht for the Glenans school, the building of which was put under the supervision of Philippe Harle who worked at the Glenans at the time. This experience so stimulated Harle that he immediately gave up his job at the school and set up as a yacht designer himself.
More on John Illingworth in The Malham Story.
Nationality:
Year:
Boat List:
Chin Blu III
Coriolanus
Dambuster
Danae
Gipsy Moth IV
Kathleen
Morag Bheag
Outlaw
Stormvogel
Swanee
Winwilloe Of Portsmouth

Brest: the world’s largest maritime festival in photographs by Nigel Pert & Dan Houston with a … END_OF_DOCUMENT_TOKEN_TO_BE_REPLACED