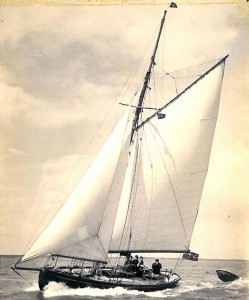 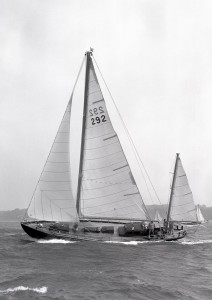 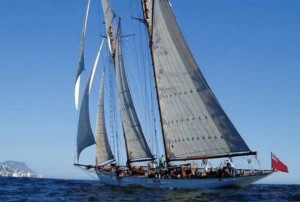 John Leather refers to Fred Shepherd (FS) as ‘….the doyen of British yacht designers and a man still remembered for the ability and beauty of his cruising yachts’. As a young man, FS spent six years in the drawing office of Arthur E Payne and during the 1890’s joined Lory and Cornwallis, a London firm of yacht brokers who also offered a design service. It was a feature of his skills in designing sailing yachts of all sizes that he seemed able to provide more space below on given dimensions, placing the volume of the hull lower than most of his competitors whilst ensuring that the resulting form remained a good sailing shape.

By 1899, FS had set up his own design practice in Norfolk Street, just off the Strand in central London. His business suffered during the 1914-18 war but he continued broking and designed a few yachts for clients hoping for happier times. He designed motor launches for the British Army and the Red Cross Service in France and Mesopotamia. By 1921, FS moved his design practice to the village of Swanwick on the River Hamble, only to move back to London after a couple of years to 199, Piccadilly where he would remain for the rest of his working days. It was from that office that FS gave advice to the late Maurice Griffiths, the young editor of the struggling magazine, Yacht Sales and Charters, which became Yachting Monthly.

Cruising sailing yachts and motor cruisers continued to be the mainstay of FS’s business. Long distance racing and cruising was then growing in popularity and in 1930 he designed Lexia which was the first British yacht to finish the 1931 Fastnet Race. When the author, Arthur Ransome looked around for someone to design his dreamship in 1937 he chose FS. Selina King embodied FS’s design philosophy for cruising yachts. One of FS’s last designs was Amokura, built at Moody’s yard, Swanwick in 1939.

FS effectively retired in September, 1939. During the previous 45 years he had designed 84 yachts, often sizeable yachts, almost all were individual designs which involved supervision of construction. The Piccadilly office closed and FS sought the peace of the Hampshire countryside at Kings Somborne, a delightful village. After a long retirement, FS died at the grand old age of 104.

Brest: the world’s largest maritime festival in photographs by Nigel Pert & Dan Houston with a … END_OF_DOCUMENT_TOKEN_TO_BE_REPLACED