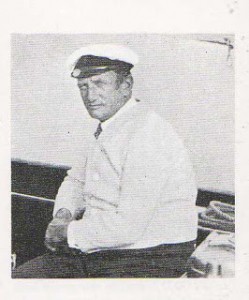 Danish architect born before the turn of the twentieth century. Originally a furniture maker by trade, like his father. He later went on top study architecture at the royal danish academy for arts. Rønne became known for pioneering longer distance trips in smaller boats.

His tours to England in his cutters were  unusual in their distance, and as he explained in an interview, only possible in the short time allocated thanks to the Kiel Canal, or Kaiser-Wilhelm-Kanal as it was then known. His exploits were mostly realised during the three weeks of summer holiday he allowed himself. During these three weeks, along with his crew, he managed the crossing getting back in time to continue his work.

The inspiration behind the designs, he claimed, was the voyage from Norway in ‘Ran I’. Alongside his colleage/friend Knud Degn, he drew ‘Ran II’ and ‘Runa’, both built in 1910 by the Neilson Brothers in Skovshoved. ‘Ran II’ was for Degn, ‘Runa’ for Rønne. There may have been assistance given by engineer Alfred Benzon at some point throughout the drawing of the 8 boats.

He designed the following boats:

Brest: the world’s largest maritime festival in photographs by Nigel Pert & Dan Houston with a … END_OF_DOCUMENT_TOKEN_TO_BE_REPLACED