In 1782, Frances Amos started a shipyard in Gosport across the harbour from the Royal Naval Dockyard at Portsmouth. In 1809 Amos apprenticed his great-nephew William Camper, and by 1821 the yard was building small trading ships.

As Amos had no children, in 1824 he allowed his nephew Camper to take over the lease on the yard. Camper forged strong links with the wealthy members of the Royal Yacht Squadron, positioning the business in the emergent yacht building industry. For twenty years from the launching of the cutter Breeze in 1836, Camper built up a reputation as a builder of fast yachts, favoured by a prestigious clientele. However, the defeat in the inaugural 1851 America’s Cup followed in 1854 by the outbreak of the Crimean War and the consequent cessation of yachting heralded a premature decline to Camper’s career.

In 1842, 14-year-old Ben Nicholson joined Camper’s yard as an apprentice. As there was no clear male heir in the Camper family, Nicholson had risen in the yard to become chief designer, producing the innovative 1860 design for the schooner yacht the Aline. The yacht’s racing success and subsequent orders prompted Nicholson’s further promotion and facilitated his choice as Camper’s replacement when he retired in 1863.

The company of Camper and Nicholson was formed in 1863, financed by both William Camper and the Lapthorn family. Nicholson undertook a 30-year programme of expansion, more than doubling the size and scale of the facilities. The design and construction of large schooners dominated the firm’s output, and Nicholson added a refit and maintenance business made possible by the expansion of the yard’s facilities.

The arrival of Ben’s three sons in the firm occasioned a final name change to Camper & Nicholsons. Eldest son Benjamin made his impact through the supply of crew, drawn mainly from regional fishermen, for leisure and racing purposes to the yachts built for the rich clientele – a service that continued until 1939. Youngest son Arthur W. found his ability best applied through managing the maintenance and construction facilities of the yard, and the purchase of expansion facilities in Southampton. 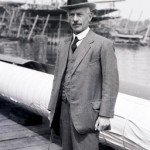 Middle son Charles emerged as the consummate yacht designer, able to combine elegance with speed and seamanship. In the early 1900s Charles developed a new powered craft which would enable the owners to come from their “big-boats” before and after the competitions. In 1912, Charles introduced the 15 metre design Istria with a Marconi rig, the first yacht in the world with a lightweight, laminated wood construction. This led to further developments and growing expertise in the use of lightweight materials. This ultimately led to arguably Nicholson’s most beautiful sailing creation, the 1927 commissioned Vita.

The height of Camper & Nicholsons was probably 1937’s Cowes Week which came to be known as Charlie Nicholson’s Regatta. All the J-Class, three quarters of the 12-Metres, half the 8-Metres and many of the ocean racers were from Charles’ board, as were many of the motor yachts in the spectator fleet. And yet for all the success, less than ten percent of Camper & Nicholsons output during his time was racing yachts.

Just prior to World War II, Charles’s son John Nicholson began to assist with the design office and in 1939 it was his own designs that helped to move the company forward. His philosophy on production developed during the war years and enabled the company to address the mass-market. After World War II, John’s cousin Charles A. Nicholson, known as Young Charlie, sent his second son George to the Riviera to work for a friend’s brokerage firm, and persuaded both owners and crews to return their yachts to the yard for winter repairs. This move was instrumental in the survival of Camper & Nicholsons in the subdued economy of a post-war Britain. In spite of continued racing successes and the production of high profile boats such as the Queen and Duke of Edinburgh’s Dragon class Bluebottle, a shortage of wood meant that the company relied on civilian repair work and Government contracts for wooden mine sweepers.

Being family owned, Camper and Nicholsons had always had a propensity to develop subsidiaries to have complete control over production and Charles E. Nicholson continued to chair the company until his death in 1954, aged 86. The foundations of a robust and successful yacht design and build company had been made that had not only survived World War I and World War II, but had provided the Royal Navy with motor yachts displaying the quality and craft of which they are still known today. As Government contracts dried up in the late 1950s, Young Charlie’s son Peter developed the production offerings of the company along three streams; large motor yachts, custom sailing yachts and the so-called “people’s yacht” made from glass-reinforced plastic. A change had started to happen in attitudes towards luxury cruising enabling Camper & Nicholsons to move forward and expand on what they had accomplished in the industry so far.

During the 1950’s things began to change within the boating industry as rapidly advancing technology and innovation created new opportunities to expand. Having largely been associated with yacht design and build, Camper & Nicholsons charter division soon began to flourish alongside the brokerage side of the company due to the gaining popularity in yachting.

Around this time George Nicholson moved to Cannes to help Camper and Nicholsons appointed agent Derek Burton to generate refit business. In 1961, their hard earned success led to the formation of Camper & Nicholsons International. This success inspired the opening of the Monaco and Palma offices during the 1960s and while brokerage side of the business performed steadily, the company set many records for the most expensive yachts sold, becoming leaders in the industry. Half a century later, our brokerage division remains unequalled, and between them our worldwide network of brokers count more than 200 years of loyal service to Camper & Nicholsons International. In 1969 Peter Nicholson stepped into his father’s shoes and in 1972 Campers merged with house building company Crest Securities Ltd to form Crest Nicholson.

As yachting gained in popularity, the charter element of the company soon began to flourish alongside its design, build, refit and brokerage divisions and this success inspired the opening of the Monaco and Palma offices during the 1960s. The brokerage side of the business performed steadily and the company set many records for the most expensive yachts sold. Half a century later, our brokerage division remains unequalled, and between them our worldwide network of brokers count more than 200 years of loyal service to Camper & Nicholsons International.

Along with expertise in superyacht design, build, charter and brokerage we have added professional Charter Marketing, Yacht Management and Crew Placements to our company’s services. To reflect our increasing success, we have continued to expand globally over the years. The nineties, in particular, saw phenomenal development. Camper & Nicholsons International opened an office in Antibes in 1991, complemented by a strong presence in Cannes, and in the mid-nineties the London division moved from its original offices to occupy Mayfair premises.

Brest: the world’s largest maritime festival in photographs by Nigel Pert & Dan Houston with a … END_OF_DOCUMENT_TOKEN_TO_BE_REPLACED