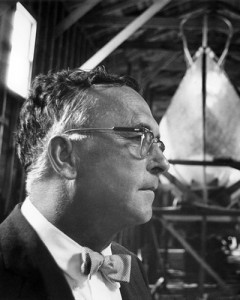 C. Raymond Hunt was an internationally known and respected helmsman and yacht designer. He was also a respected helmsman. He won the Sears Cup twice, the first time when he was only 15. He sailed R-boats, Q-boats, 8-Metres, and was a member of the afterguard on the J-boat Yankee. In 1963 he sailed his own design, “Chaje II,” to victory in the 5.5 World Championship. His apparent uncanny knowledge of how to move a boat through the water forms a skill no tank test or formula can replicate.

These intuitive skills enabled Ray to become one of the most innovative designers of his era. Although he had no formal education beyond prep school, he developed radically new designs which were breakthroughs then and continue today to influence not just yacht design but vessel design as well.
A list of his designs includes so many icons of the business: the Concordia yawl (Ray sailed his Harrier to Cowes Week victory; other Corcordias are coveted even today); the Boston Whaler (still remembered by its chainsawed promotion for unsinkability); the succession of Miami-Nassau winning “Moppie’s” (which built the fame and success of Dick Bertram and the company he forged from their success); the 110 and larger 210 (which brought simple, planing keelboats to junior and club sailboat racing), the 12 Meter “Easterner” and Olympic Gold Medal winning 5.5 Meter “Minotaur” – and so many others.

As Eric Sorenson wrote in Yachts International (May 2001), Ray “clearly had an uncanny ability to rethink the very concept of what a boat should be and how it should be able to perform. During flashes of inspiration, everything was reduced in his mind’s eye to a boat’s elemental components. Hunt was then able to put to paper the form of the boat envisioned.”
This process is elegantly illustrated by Ray’s development and perfection of the high-deadrise hull, the Deep V. Instinctively, he knew the angle for the deep-V should be 24 degrees in raceboats, and 22 degrees for less speedy hulls. And he knew that a rounded, bell-shaped V-point would ride softer than a sharp one. He understood the purpose for lift strips to promote planing and reduce spray. He got it all right. And the rest is, of course, history.

Brest: the world’s largest maritime festival in photographs by Nigel Pert & Dan Houston with a … END_OF_DOCUMENT_TOKEN_TO_BE_REPLACED