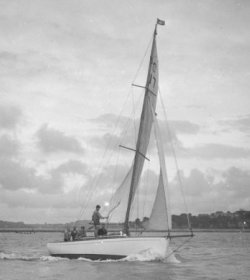 Bert Samuel Woollacott was born in England in 1878 and moved with his family to New Zealand in 1922 aged 44. They settled in Devonport and Bert lived there for the rest of his life.

Shortly after arriving Bert built the 16 footer centre boarder ‘Rival’ and not long after built ‘Rover’. He is known to have built no less than 12 other wooden keel yachts including ‘Vectis’, Medina ‘Rambler’ and Ladybird. Altogether Bert designed over 50 yachts and well over 30 launches and fishing boats.

One of his favourite yachts was said to be the 23 foot ‘Little May’ which was ‘beautifully balanced and a delightful creation to sail’.

As Bert’s eyesight began to fade towards the end of his life the design work was carried on by his son John and subsequently his grandson Rob.

Brest: the world’s largest maritime festival in photographs by Nigel Pert & Dan Houston with a … END_OF_DOCUMENT_TOKEN_TO_BE_REPLACED