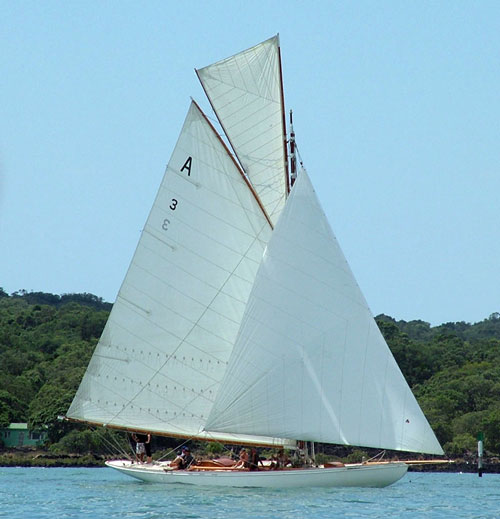 The Wizard of Stanley Bay, Arch Logan, third son of the famous yacht builder Robert Logan Senior and Margaret Logan, was born in Greenock, Scotland, on 18 December 1865.  Nine years later, the family emigrated to New Zealand, where, by 1878, Robert had set up as a boat-builder in Devonport.  Learning his trade from his father, Arch was, by 1895, the chief designer at Logan Brothers.

Arch’s reputation as a designer and builder of the very best yachts stems from the period between 1893 and 1910, when the Logan partnership dissolved.  Like their great rival, Charles Bailey Junior, the Logans built a huge variety of motor and sailing craft for an equally diverse clientele.  But it is their yachts, both centreboard and keel, clinker and carvel, designed by Arch, for which they are primarily renowned.

In 1910, for the planned development of the new Kings Wharf project, the Auckland Harbour Board bought back the 99-year lease on the Logan’s yard.  It was a generous settlement and the brothers were now reasonably well off.  No longer under pressure to continue working at the same pace, the Logans decided to dissolve the old partnership. Arch then set up on his own in a small way from his Stanley Bay house and boatshed overlooking Ngataringa Bay, on Auckland’s North Shore.  He designed many significant yachts over the next thirty years and, if you could persuade him, also built launches and small craft, and continued working this way right up until his death.

Although many of his smaller craft had since passed into legend, Arch Logan’s graceful keelers were still champions, as were his most recent creations, the 22-foot Mullet boats Ngaira (1911) and Valeria (1912) and the 26-footer Omatere (1913).  By the time the first M’s were built in 1922, Arch Logan was secure in his reputation as the best designer and builder on the Waitemata. The fact that Logan was again building Patikis was major news.  The Marconi-rigged M-Class Patikis did not disappoint, and were certainly superior to the majority of 18-foot V-Class boats racing at the time.

As Logan grew older, building took on a lower priority.  He was still producing boats but most of his time was spent on design.  His last Emmy was Manu, built in 1929 for the Chamberlins of Ponui Island.  Almost as a swansong, Manu harked back to the older Patikis in appearance, for she had the dark top plank, the old Logan trademark that appeared on most of his Restricted Patikis, and on many of his unrestricted ones as well. Arch Logan’s death, on 27 March 1940 in his seventy-fifth year, was overshadowed by that of the Prime Minister, Michael Joseph Savage, on the same day, but his achievements were recognised barely twelve months later with the creation of the Arch Logan Memorial Trophy.

Brest: the world’s largest maritime festival in photographs by Nigel Pert & Dan Houston with a … END_OF_DOCUMENT_TOKEN_TO_BE_REPLACED