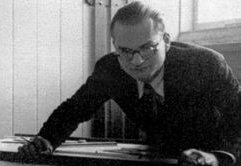 André Mauric had a prolific career especially centered on the creation of racing yachts.
Son of a Marseillais cabinet-maker with a passion for sailing his study in mathematics was halted by the economic crisis of 1929 and he took classes in naval architect while working for Charles Baudouin, a boat builder in Marseilles.
Here he designed and built fishing boats and other harbor craft on the eve of the second World War.
During this period he also designed racing sailboats, and created a version of the Star class that proved superior to all others at the time.
In offshore boats, he becomes famous in 1972 for ‘Unthinkable?’, winner of the half-ton cup (IOR), which evolved into the hugely popular FIRST 30 from Beneteau. This boat later became the mono-hull used for the Tour de France a la Voile.
In 1973 Mauric designed Melody (10,25m) another big success, this time for Jeanneau.
Mauric was also responsible for Pen Duick VI, sailed by Éric Tabarly in the Whitbread race, around the world.
In 1975, winning half-tonner Jabadao, sailed by Guy Cornou.
In 1978, Kriter V then in 1983, Kriter VIII.
He was part of the challenge for the America’s Cup sponsored by Baron Bich, (France, And ‘France II’.).
Mauric also worked on a number of the boats used by Jacques Cousteau in his many voyages around the world.

Brest: the world’s largest maritime festival in photographs by Nigel Pert & Dan Houston with a … END_OF_DOCUMENT_TOKEN_TO_BE_REPLACED