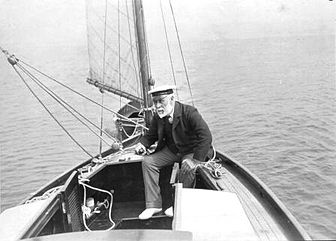 One of the foremost designers of small cruising yachts and his craft, acknowledged to be of classic quality, were and still are sought after by small boat sailors and builders in many countries. His designs, and his writings on the subject, contributed significantly to the evolution of the seaworthy cruising yacht. He had a lifelong career in art, exhibiting many times at the Royal Academy, and turned to yacht design as an activity complementary to his love of small boat sailing.He combined the artistic, the practical, the adventurous and the gregarious, in a way rarely found today. Beyond his enduring art and designs, he embodied qualities of seamanship, resourcefulness, humour and grace, and an ability to appreciate and communicate the entire experience of cruising under sail, which are not often equalled.

The work of Albert Strange has been admired and respected by yachtsmen for more than a hundred years. Though never professionally trained as a naval architect, Strange designed some 150 craft of varying size and style. Some were drawn on spec, others for design competitions, still others for commissioning clients. Some were never built whilst, of those that were, many still grace the worlds harbours and anchorages.

Albert Strange is remembered for a form of pointed stern which has become associated with his designs, and favours yawl-rigged small yachts. His membership of the Humber Yawl Club and his connection with the canoe yawl centre-boarders in its formative years all influenced his later design ideals. This type of stern, the canoe counter, became a hallmark of Stranges work.

Brest: the world’s largest maritime festival in photographs by Nigel Pert & Dan Houston with a … END_OF_DOCUMENT_TOKEN_TO_BE_REPLACED