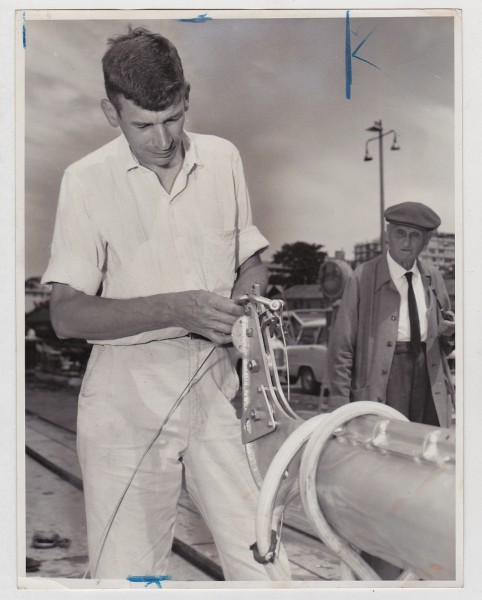 Payne was born in London, England in 1921, but moved as part of his family to Australia in 1925. His father, Sidney, was a ship’s master, but went to shore based activities and then emigrated with the family to Brisbane, Queensland to work for Dalgety’s on the waterfront. The family moved to Sydney where Payne attended Sydney Grammar School and sailed small craft with his brother Bill and friends.

Payne worked at the Royal Australian Navy’s Cockatoo Island Dockyard in Sydney during World War II and meanwhile training as a naval architect at Sydney Technical College, becoming in 1945 its first graduate, awarded a diploma that at the time was the highest level available. 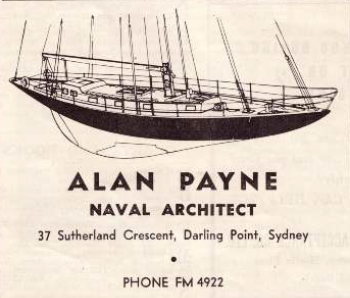 Payne created a private practice in naval architecture immediately after World War II, initially designing yachts and launches, then later some fishing trawlers. Payne was a crew member on ‘Horizon’ in the 1945, first Sydney to Hobart Yacht Race, and several subsequent events. An early design of this period was the Payne-Mortlock sailing canoe, a 5.8m design that is still raced, designed with brother Bill and friend Bryce Mortlock.

At different times Payne worked alone or with just one employee, and even returned to Cockatoo Dockyard for a period in the 1950’s. From about 1957 onwards he had a firm under his name and a varying number of employees. In the mid 1960’s he left yacht design to work as an engineer for client Russell Slade at his Bonds clothing plant, but eventually returned to his first profession. He was attached for a short period to the English naval architects Burness, Corlett & Partners when they established an office in Sydney in the 1970’s, and formed a partnership with Howard Peachey in the late 1980’s.

Payne’s first designs were often in collaboration with Bryce Mortlock, and his brother Bill. Together they began designing and building their own craft, initially for the Restricted 12 Foot Skiff class. The Payne-Mortlock sailing canoe was their major work, became famous, and helped bring Payne to the attention of the sailing world.[1] He was also responsible for designing the Corsair (dinghy), a 16-foot, three-handed design.

Payne’s first design that sailed in the Sydney to Hobart race was ‘Nocturne’, a 35 foot long raised deck wooden cutter originally planned as a harbour racer, but adapted to ocean racing by the owner Bob Bull with the designer’s input. It won the light weather 1952 Sydney to Hobart Yacht Race on line honours. ‘Nocturne’ was a light weight yacht with a spade rudder, and the tough conditions usually encountered in ocean racing convinced Payne that it was better to design strong and seaworthy ocean racing and cruising yachts. The long-keeled steel ‘Solo’ in 1953, the steel multi chine ‘Koonya’, and the wooden Tasman Seabird Class designs in 1959 are boats with these qualities; In 1959 the newly launched Tasman Seabird ‘Cherana’ won the race, sister ship ‘Kaleena’ was fifth and ‘Solo’ took line honours.

The ‘Koonya’ design was to become a model on which many other Payne designs (and yacht lengths) were based, with the multiple chinekinks in the steel becoming almost a Payne trademark. The deep keel, sloping from the bow, with enclosed lead ballast, was another Payne mark.

Also during the 1950’s, Payne was chief architect for De Havilland Marine, an offshoot of aircraft manufacturer, de Havilland Australia that was seeking to diversify its aluminium products.

Sir Frank Packer commissioned Payne to design Australia’s first America’s Cup challenger for the 1962 event, the 12-Metre class Gretel. The champion, American design Vim was brought to Australia and studied closely. Payne and his small team designed and tested over 30 models before building Gretel, and also designed most of the fittings and mechanical features for the new challenger. A number of the items had advanced or new features such as cross-linking the main winches (grinders) to double the number of crew who could operate a winch. Many observers felt Gretel was as good as or better than the defender.

Payne’s second 12-metre design, Gretel II in 1970, added to his international recognition as a leading yacht designer. His third design for1983, the aluminium Advance, was hampered by a lack of funds and a decision to orient the boat to light weather conditions.

Brest: the world’s largest maritime festival in photographs by Nigel Pert & Dan Houston with a … END_OF_DOCUMENT_TOKEN_TO_BE_REPLACED