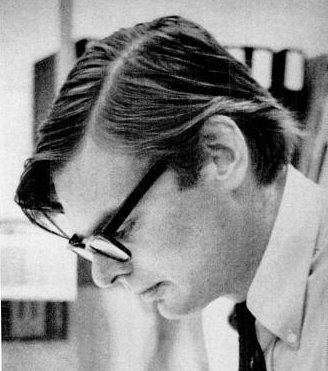 Gurney should be remembered as a great designer who penned Windward Passage. He was tasked to design a suitable replacement for the equally famous Herreshoff design Ticonderoga, and produced one of the greatest designs of the past 50 years.

A Tribute to Alan Gurney by Ted Jones:

“Alan Gurney designed boats the old fashioned way with drafting pencil on velum, using splines and ducks (weights), a planimeter, and a seaman’s eye. He thought like the water through which he had sailed, in England, transatlantic, the USA, both polar regions and much of what lay in between. As a young lad, he would make boats out of toilet tissue (which at that time had characteristics of waxed paper) and float them in his bath. He spurned a career in the army to pursue a career as a yacht designer, and ultimately moved on to an early passion, Antarctic exploration. He had amassed an impressive collection of hundreds of photographs of every known Antarctic penguin species.

I had the great good fortune — a privilege — to be his friend, and to have had lunch with him frequently as he was in the process of drawing the myriad details of what was to become Windward Passage, the world famous dream boat of lumber tycoon, Robert F. Johnson. During each lunch-time visit, I would meet Alan in his basement studio on New York’s East 54th Street, and he would show me the most recent drawings.

Johnson had selected Gurney for the new design having been impressed by the performance of George Moffett’s “Guinevere”, a 48 foot Jacobsen-built aluminum yawl which had won the SORC in 1966, the second of two ocean racers Alan had designed for Moffett. The first was a wood-built boat, the Nantucket 38, aboard which I had the sailed in the 1964 Bermuda Race. Later, I transferred to Humphrey Simson for whom Alan had designed a yawl similar to “Guinevere”, the 47 foot Derecktor built Kittiwake, aboard which I sailed in the 1966 SORC, Bermuda, and Transatlantic races. “Kittiwake” did well in her class in the SORC series, overshadowed only by Ted Turner’s legendary Cal-40, “Vamp X” which won everything in her class that year including the Transatlantic race from Bermuda to Copenhagen.

I had met Alan Gurney in 1960 following that year’s Bermuda Race. I was a yacht broker in the office of Tripp & Campbell in New York City when Englishman Gurney was brought around by G. Colin Ratsey (of the English sailmaking firm) to meet yacht designer Bill Tripp. Still only 24, Alan had won a prestigious competition for a modern “club racer” sponsored by the British magazine, “Yachting World” which brought him to the attention of Chesapeake Bay yachtsman Jack Lacy for whom Alan had designed a 35 foot sloop. While nothing came immediately of the meeting with Tripp, both partners at Tripp & Campbell had been impressed, and when Tripp’s design assistant resigned a short time later. The firm offered the job to Gurney who flew back to New York to accept it.

Among the early assignments for the new design assistant was to work out a plating schedule for a 42 foot aluminum “Raider” class Tripp had designed for a new aluminum boat company Gib Wolfe had started in central New York State. Wolfe’s company did not have the ability to form compound curves in aluminum plates but he did not want the new boat to appear to have chines. Alan was given the task of working out developed surfaces (bending in only one plane) for the new design. The “jigsaw puzzle” worked out by Gurney went together perfectly. No one would have guessed that the two boats built from this Tripp design were anything other than conventional round built hulls. Gib Wolfe was so pleased and impressed by Alan’s work on the Raider that he commissioned him to design, on his own account, the “Wolverine”, a 28 foot aluminum chine sloop, of which several were built before the company ceased production. The prototype Wolverine, sailed by New Orleans champion sailor Gene Wallet in the 1962 Yachting Magazine One-of-a-Kind regatta (Coral Gables, Florida) registered three bullets out of three in the cruising division which corrected, on an arbitrary handicap, to third behind the Cal 24 and the Cal 20.

Bill Tripp, frustrated by time spent commuting from Long Island to the city which could have been spend working out of his home, left the partnership in 1962, offering to take Alan with him, which offer was declined. Gurney was left on his own, working with yacht broker William B. Campbell out of the former Tripp & Campbell offices in Rockefeller Center, abandoned by Tripp.

Two Bermuda 40 owners, Moffett and Simson stepped in with contracts for Alan to design the aforementioned “Guinevere” and “Kittiwake.” In addition to these and the Nantucket 38, Moffett also commissioned Gurney to design a 5.5 Meter which, alas, was never built, and then came Bob Johnson with his then revolutionary idea to be first to finish, and set course records for the world’s most prestigious ocean races, ignoring handicap prizes.

“Windward Passage” set the offshore racing world alight, accomplishing precisely what Bob Johnson wanted, but the 1969 Transpac elapsed time record was taken away by a protest after a starting line foul involving a small boat in another class. Johnson did not live to see his dream fulfilled. Two years later, under Johnson’s sons, Mark and Fritz, “Passage” shattered her previous actual elapsed time, setting an official new record which stood for many subsequent Transpac’s. Earlier, in 1971, “Windward Passage”, under command of Johnson’s sons had set a course record in the Miami-Montego Bay race which stood for 30 years and was only eclipsed when the offshore racing rules permitted larger boats than the previous 73-foot overall length to which “Passage” had been limited.

Alan Gurney’s fame spread, and he was commissioned by several well known yachtsmen including T. Vincent Learson, a chairman of IBM, a larger “Kittiwake” for Simson, and, among many others, notably, a light displacement 33 footer for New England sailor Chuck Blair which won 65 per cent if all races entered, according to a Murray Davis article in Boating Magazine. He also designed “Great Britain II”, a 73 footer similar to Passage for Chay Blythe which won the Whitbread crewed around the world race. Except for the well received O’Day 27 and Islander 36. Series of production boats, which would have assured continuing royalties over the years, eluded Gurney. Custom work, although prestigious, meant starting over with each new client. Unable to devote sufficient time to work with all of the custom clients who wanted his services, and unwilling to take on the responsibility of a staff, disillusioned by the trend toward unsavory, unseaworthy offshore racing boats, Alan Gurney left his yacht design business and took an Antarctic cruise on the “Lindeblad Explorer.” At the end of the cruise, he signed up for the next cruise. He was hooked on what was to become a second career.

The following season, Alan signed on as a cruise guide and lecturer, staying with Lindeblad for a dozen years until the ship was sold, although he later returned briefly to the ship, sailing under her new colors. Ultimately, he rejoined Carl Lindeblad for an epic journey through the Northwest Passage, the largely unfulfilled dream of explorers and adventurers for centuries.

His Antarctic and Arctic cruises led to two books, which took years to research and write. (Alan was as meticulous a writer as he was a yacht designer). The first book, “Below the Convergence”, chronicles the early theories about the suspected existence of the Antarctic Continent and early voyages of attempted discovery. His descriptions of conditions aboard early exploratory journeys could only have been written by someone who had made long sea voyages, and his knowledge of the objectives of those early mariners is monumental. “It’s as if you spent hours in museums studying the portraits of these long dead adventurers”, I said to Alan during a visit to his New York publisher in 1991. “Well”, he said with a sardonic chuckle, “that’s just about what I did.”

His second book, “The Search for the White Continent”, chronicles the voyages of actual discovery and supposed sightings of the Antarctic Continent in which he found justification for many claims of discovery, and debunked others of dubious merit.

His third book, “The Compass”, is a detailed history of the development of this basic navigation tool which made possible the early voyages of discovery and continues to be the most essential navigation tool of mariners today. It is a “must read” by all who venture forth and need to know where they are headed.

Alan P. Gurney’s education included a stint as a corporal in the British Army, a design apprenticeship with J. Francis Jones, work for three years in the West Mersey firm of yacht designer Kim Holman, and a personal thirst for knowledge and understanding which transcended that of the most well educated amongst us. He excelled in two diverse careers (a third as an author), earning the respect of peers and competitors alike. He had returned to Great Britain from his adopted New York City to an estate kennel, on the Hebridean island of Islay, which he fashioned into a rustic home on the verge of the sea. There he met and married his second wife, Carol, a school teacher. With Carol’s change of employment several years later, the Gurneys left Islay for a more comfortable home on the east coast of England.

Diagnosed with terminal esophageal cancer in April 2012, he left this life barely three months later, on July 22nd. I miss Alan Gurney as a friend. The world of sailing and scholars of maritime history have lost a brilliant star whose light they can now appreciate only through his sailboat designs and his published histories which he has left behind for posterity.

Smooth sailing old friend. May there always be high tide and favorable winds in the new world to which you have sailed so suddenly away.”

Brest: the world’s largest maritime festival in photographs by Nigel Pert & Dan Houston with a … END_OF_DOCUMENT_TOKEN_TO_BE_REPLACED