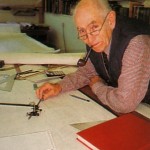 Having trained as an aircraft engineer, he started work as a draughtsman at De Havilland aircraft factory before setting up as a boat designer.

Orignally based in Burnham-on-Crouch, Buchanan moved his office to Jersey in the 1960s. Here he enjoyed a long and distinguished career in yacht design that included his own succesful racing yacht Taeping, a 31ft Bermudan sloop that came 2nd in the East Anglian Offshore Individual Championship in her first season.

From the early 1970s Buchanan continued to work from his home in Jersey and is credited with having designed upwards of 2,400 boats in his career.

In 1979, in recognition of his achievements, he was awarded the medal of the Small Craft Group of the Royal Institution of Naval Architects.

Buchanan was well-known for his refusal to retire, drawing beautiful yachts well into his eighties.

Brest: the world’s largest maritime festival in photographs by Nigel Pert & Dan Houston with a … END_OF_DOCUMENT_TOKEN_TO_BE_REPLACED