You are here: Home / Articles / Beatrice – A historic yacht donated to the city of Imperia 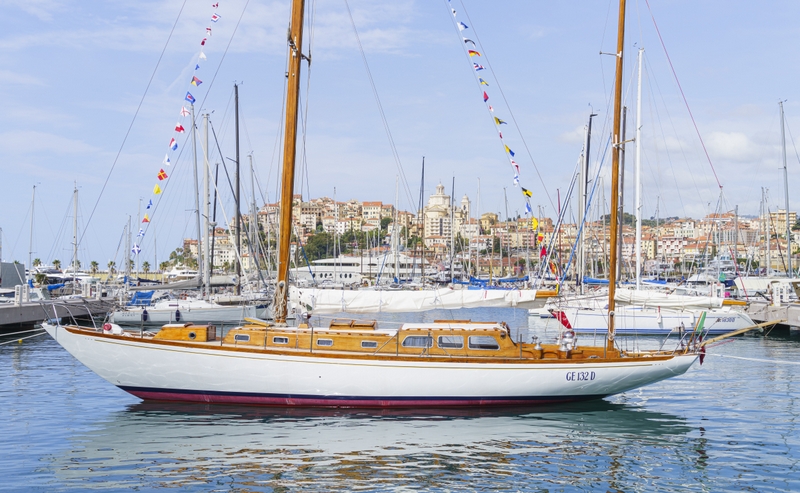 Beatrice, an historic wooden sailboat of note, has been donated to the city of Imperia. The official ceremony was held on July 15thin the Ligurian town’s naval museum and was followed by a flag raising ceremony on the Lungomare Marinai d’Italia-Molo San Lazzaro attended by local authorities and Diana Bracco, president of the Bracco Group and last owner of the vessel. 15.56 meters long, with a beam of 3.78 meters, Beatrice was launched in 1963 at the Cantiere Sangermani in Lavagna. Sangermani is an internationally acclaimed shipyard specialized in wooden vessels and was also responsible for the design of Beatrice. Mahogany planking over iroko frames with a teak deck, she is rigged as a Marconi yawl with her two masts, main and mizzen, in silver spruce. During the ceremony the volume “Beatrice – Just follow the sea” was also presented. Written by Fabio Pozzo with photography by Carlo Borlenghi, the volume includes copies of her original drawings, her 50 years of history and the stories of those who were part of it and those who brought her back to life. 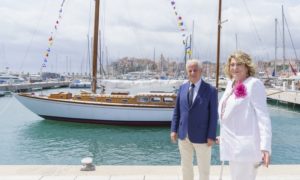 Beatrice with the Mayor of Imperia, Claudio Scajola and Diana Bracco, who donated the yacht. @Studio Borlenghi 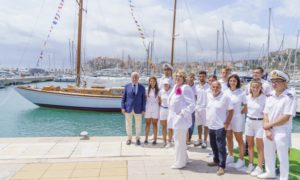 Beatrice with Bracco and the students. @Studio Borlenghi

CLAUDIO SCAJOLA: “SAVED THANKS TO THE HARD WORK OF THE STUDENTS”

Claudio Scajola, the Mayor of Imperia, thanked Diana Bracco for such an important donation, a gesture of sincere affection for the town and expressed the administration’s enthusiasm for this laudable initiative. “I welcome with great pleasure and sincere emotion this initiative related to the sea and to maritime history, two elements that have always had a special place in Imperia’s heart. I am proud that our harbour will greet this splendid vessel, restored by the loving work of the young and talented students of Imperia’s Nautical Institute. The presence of Beatrice, and the nearby Naval Museum, will allow us to face tomorrow’s challenges with the awareness that we esteem the value of everything beautiful and significant created here in the past.” Scajola then renewed the invitation for Beatrice to participate in the 22nd Edition of Le Vele d’Epoca d’Imperia, since 1986 one of the classic Italian events for historic yachts. After changing to a biennial format in 1992, in 2019 the event is annual once again, despite 2020’s cancellation due to the pandemic.

In her almost six decades of life Beatrice has had four owners. Partners Antonietta Tiozzo and Giovanni Stefani, industrialists from Veneto, commissioned her as a First Class under the RORC rule. Launched on August 14th, 1963, she was christened Huna. In 1981 she was sold to Mario Rondolino, an entrepreneur in information technology from Piedmont, and his sister-in-law Jacqueline Ferey; they renamed her Beatrice. After Rondolino’s death in 1998, in 1999 the yawl was inherited by his brother Giorgio who then sold her to Roberto De Silva, Diana Bracco’s husband. Beatrice was given a new lease on life and from her new home in Santo Stefano al Mare’s port of Marina degli Aregai she undertook several cruises and participated in the 2000 and 2002 editions of Le Vele d’Epoca d’Imperia, at the time part of the Prada Challenge for Classic Yachts and after 2005 the Panerai Classic Yachts Challenge. At the racing in Imperia Beatrice had Dani De Grassi on the helm, the gifted and expert sailor raised in the Bora winds of the upper Adriatic in Trieste. 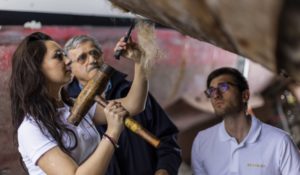 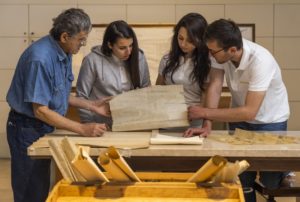 In 2010 Beatrice returned to the Sangermani yard for an important refit, but when Roberto De Silva died in 2012 the boat was left forgotten at her moorings. In 2016 Giancarlo Gaudino, captain of the yawl, suggested that Ms. Bracco donate Beatrice to Imperia. Contact was made with Luca Bonjean, part of the teaching staff at the Andrea Doria, who enthusiastically assisted in the initiative. Beatrice left Lavagna and began her refit at the Imperia Yacht Service with the passionate involvement of the students of the nautical institute, their parents and the inhabitants of Imperia who took the classic yawl to heart. Volunteers from every walk of life, young and old, fathers, mothers, even grandparents; all contributed to Beatrice’s rebirth. Diana Bracco: “When I was asked one evening what should we do with this boat, whose lines and seakeeping qualities were highly appreciated by Roberto, I enthusiastically embraced captain Gaudino’s idea of donating Beatrice to the City of Imperia, to use her for the student’s sail-training after her restoration. I liked the idea of giving a second life to Beatrice, and I hope that she will be able to participate in some of the classic yacht events, teaching and furthering the work-study programs that are so important to me and that I firmly believe in.” 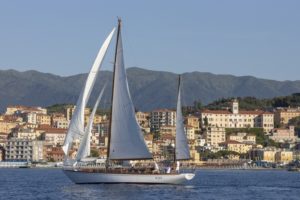 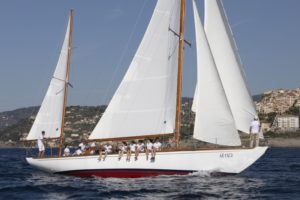 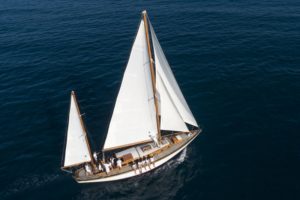 Diana Bracco De Silva, Cavaliere del Lavoro, is president and C.E.O. of the pharmaceutical company of the same name, a global leader IN diagnostic imaging. Ms. Bracco isn’t new to classic yachts. In the 1990’s Diana De Silva Cosmetiques, with the brand ‘Breeze’, sponsored the refit and the racing campaigns of two historic boats, the 1931 Six Meter Class Dan, an ex-olympic participant that once belonged to the King of Denmark, and the 5.5 Meter Class Dalgra III. Built in 1957, in 1958 Dalgra III won the Coppa d’Italia and later was skipped by none other than Agostino Straulino, the Italian sailing hero. Both boats raced in the Imperia regattas during the 1990’s. After 25 years, the donation of Beatrice is a perfect continuation of the traditional involvement in vintage yachting by the family of entrepreneurs.

Brest: the world’s largest maritime festival in photographs by Nigel Pert & Dan Houston with a … END_OF_DOCUMENT_TOKEN_TO_BE_REPLACED