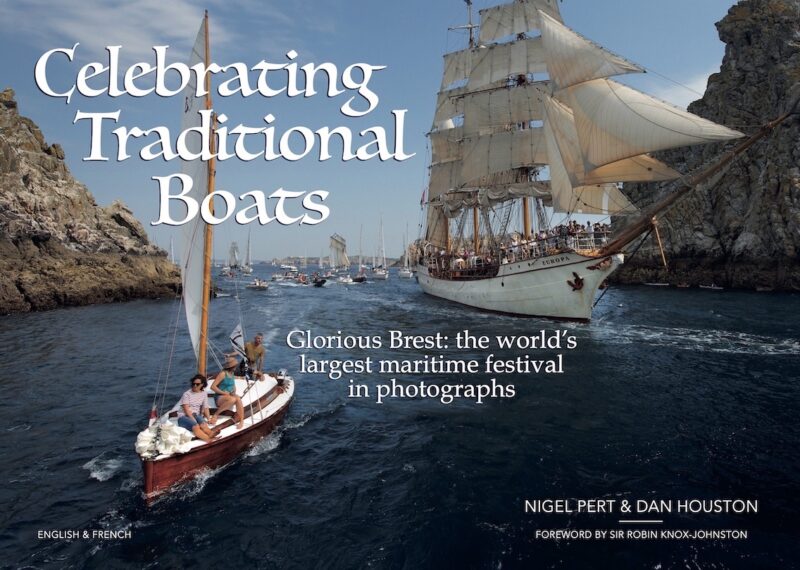 by Nigel Pert & Dan Houston with a foreword by Sir Robin Knox-Johnston.

Dan Houston and Nigel Pert launch a large-format high quality book of gorgeous photographs covering the Brest Festivals, which have occurred every four years, since 1992.

The Fêtes Maritimes at Brest is the world’s largest sea festival – with nearly 2,000 boats manned (and womanned) by 10,000 sailors in front of a quayside crowd that can pull a million visitors flocking to the North West French port over the week.

With an international feel it celebrates all aspects of traditional maritime life with boats from dinghies toTall Ships, craft displays, music, food and fireworks. ‘Villages’ from around the world celebrate andpromote the seaborne heritage of different nations and peoples.

Brest 2020 was due to begin on July 10 but was Covid-cancelled in early May. Les Fêtes expects to return in 2022 although organisers have not confirmed this date. (All the more reason to enjoy this new book!)

This is a book for anyone who likes old boats and the traditions of the sea. And it would make an idealgift(!) It’s packed with photos with short insightful captions, in both English and French. There is also a separate French cover version.

Britain’s greatest living sailor, Sir Robin Knox-Johnston, is a fan of the festival and joint Patron with Olivier de Kersauson at the last event in 2016. Sir Robin’s amusing foreword aptly sums up the festival –about how he fired a canon from a Thames Sailing Barge at the first event in 1992.

“I have seen more in this book than at all the festivals I have attended. Bravo! For once it’s not just a glossy book of boat portraits. And thanks to all these unknown faces (overflowing with joy), you’re taken to the heart of the festival. And that does you good!,”  Daniel Allisy, former editor Voiles et Voiliers – France’s top sailing magazine

“The great French festival of the sea comes alive in Nigel Pert’s stunning images and Dan Houston’s insightful, informed prose. This is an unrivalled gathering of the world’s maritime traditions, and Pert and Houston take us there., ” Matt Murphy, Editor, WoodenBoat

“A mouth-watering feast for lovers of traditional craft and the people who sail them,” Andrew Bray, editor (retired) Yachting World

“This lively book really reflects the spirit and atmosphere of the Brest festivals, and the immersive cultural event of friendship that takes place between the visitors and sailors from all over the world,”  Yann Cariou, Captain of the Tall Ship L’Hermione

Both English and French cover versions are available through Amazon.

A terrific book for sailors or those fascinated with the idea of sailing, or of cruising, and long … END_OF_DOCUMENT_TOKEN_TO_BE_REPLACED